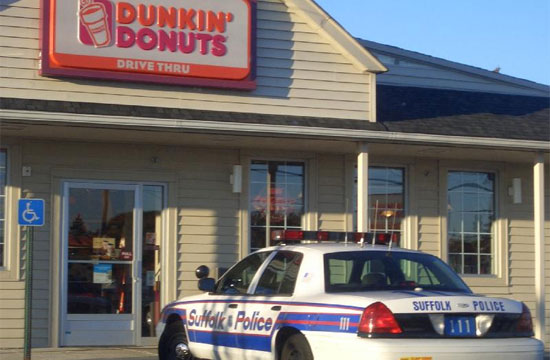 While everyone in Boston (and the rest of the nation) was collectively locked inside their homes and affixed to CNN yesterday, one group of intrepid Bostonians were hard at work: the employees at Dunkin’ Donuts.

“But the police!” you might protest, thinking that we’re making light of the Boston Police Department’s harrowing search for the second Marathon bombing suspect that ended in gunfire last night in Watertown, MA. We would never mock our men in uniform — in fact, we celebrate them. At the request of law enforcement officials, Dunkin’ Donuts remained one of the few businesses operating in locked-down neighborhoods, serving coffee and hot food to emergency service workers and police.

The Boston-based chain was only too happy to comply, reports The Boston Globe — even handing out their products for free. The employees working during the lockdown shifts, too, seemed resolute: “I’m with this guy here — see those tattoos in his arm? He’s the toughest guy in our local,” joked Don Foley, a glazier at the 60 State Street location. “There’s a lot of police presence. I don’t think anything crazy is going to happen.”

Notably, the Seattle-based Starbucks chain shut down all 64 of their stores when the lock-down went into effect. “It was strongly advised that partners and customers who were in the stores remain in the stores,” said Starbucks spokeswoman Jaime Riley, which is PR-speak for “The Government of Massachusetts does not think we are as tough or as ballsy as the fine folks of Dunkin’ Donuts.”

And truly, Dunkin’ Donuts is only for the stout of heart and brash of spirit. As this Boston-based Esquire writer so aptly put it, “If Dunkies closes, the terrorists win.”