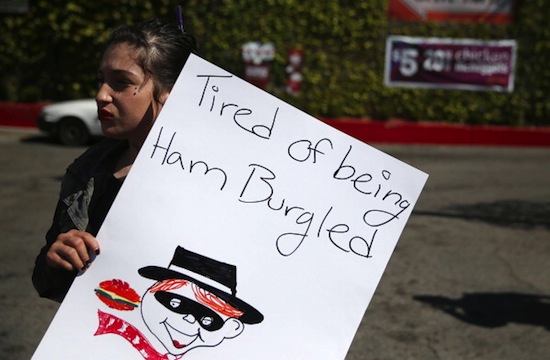 Think she’s looking at you, Resy.

Eater’s Editor in Chief, Amanda Kludt, published an essay on another site within Vox Media, The Verge, on her thoughts on the future of the restaurant industry. And we liked that our gal called for like, change that will do some actual good for people’s lives, not just make getting a reservation easier.

Oh, we just call not getting a table at Next a white people problem, but calling them “non-problems” works too.

And yes, Kludt does throw the Resy name into the mix of all these apps, the same reservation app created by the co-founders of Eater, but we digress.

Instead, Kludt hopes that the restaurant industry will bring significant changes to restaurant workers’ quality of lives.

Is it in fact possible? Well, in the far future, maybe when we’re all living in spaceships or something. Connecticut passed the first paid sick leave state legislation, and New Jersey is not far behind. Cities like Seattle are upping the minimum wage. But then CEOs, business owners, and restauranteurs decry minimum wage hikes, Obamacare, tipping, even credit card surcharges for Christ’s sake, and we are thrown back into a system that devalues just about everyone that makes our yuppie meals possible.

If Eater is out to change the industry to benefit those who work the hardest for our meals, we are 1,000,000 percent in.