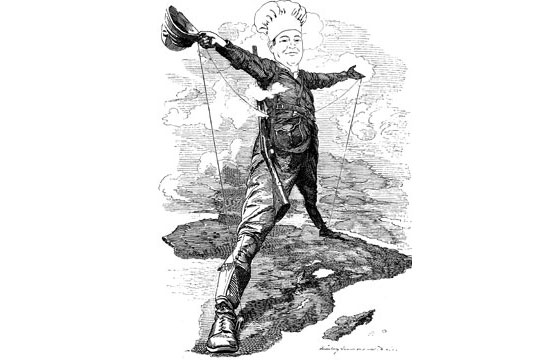 After the New York Times published an article by Gilt Taste editor Francis Lam covering the phenomenon of Caucasian chefs becoming famous for cooking food from other cultures, bao-maker and shot-caller Eddie Huang was not happy. “FRANCIS, HAMMER THEM!” he wrote to Lam. “Food is PERSONAL. Business is personal! The Godfather was wrong!”

If you happened to read the NYT article, Lam takes a far more measured approach, but the two men decided to debate it in a very gentlemanly, very thorough, and very interesting fashion on Gilt Taste which you must read now.

To briefly (and inadequately) recap:

Huang argues that white chefs like Harold Dieterle, Andy Riker, and Rick Bayless practice culinary “imperialism” by repackaging authentic cuisine from other cultures and sell it back to the public “at a premium,” essentially stripping any recognition from the culturally “true” masters of the cuisine and making it more difficult for them to enter the culinary scene.

Lam, on the other hand, believes that “the issues are more structural” — with both the media and the consumer constantly clamoring and searching for something creative and new — hence, why he didn’t go after the white guys who like Asian cuisine.

I have some thoughts.

1: Addressing Eddie’s claim that America is an imperialistic “processing plant” that brands other countries’ foods as “American”: Americans aren’t the only culture guilty of taking other culture’s foods and tweaking it to their own tastes. Not only do prominent foreign chefs do it (for instance, Jean-Georges Vongerichten loves Asian cuisine, and the Ethiopian-Swedish Marcus Samuelsson once opened up a Japanese restaurant), you see the phenomenon in other countries. Japanese people adore European pastries; Filipino cuisine draws a lot on American, Latino, and Asian influences; even my native Vietnamese food is a direct descendant of French and Chinese influence.

However, these cuisines developed in these countries after they’d been occupied by other countries, which brings me to my real point. Cuisines collide all the time, and this is probably the least violent (and possibly the least disingenuous) way that it’s happening. The concept of chefs meticulously researching and bringing almost-authentic foreign cuisines to America may not be the best of all possible outcomes — that would be awesome Asian chefs getting the recognition they deserve — but it’s far more respectful than forcing the rest of the world to adapt to American preferences. Whether or not their intentions are pure, ultimately, varies from chef to chef.

2: Lam touches on this briefly, but English-speaking Caucasians, as well as second-generation kids who speak fluent English, are in a much better position to promote their restaurants through the American media circuit than immigrants who are recognized for their cuisine — i.e., television appearances, mad tweeting, and constant social media. The exceptions to that rule tend to be French or Italian chefs, and they’re already associated with Good Food in the eyes of most people. It’s a rare case for the mom-and-pop restaurant owners to be media savvy enough to gain recognition in the industry. Like Lam says, it’s simply the way that the media is structured and it’s a significant barrier to entry — one that Eddie vaulted over effortlessly.

3: This is one step closer to my idea of a symposium on Why Food People Are The Only Asian-Americans Considered Badasses In Mainstream American Culture.

Ed Note: The original image accompanying this post has been replaced as I felt it didn’t accurately reflect the content of the article.