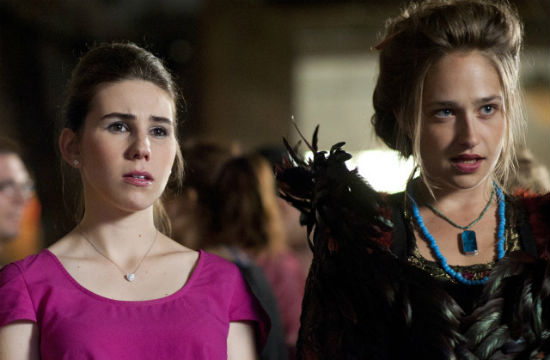 We had to wait two weeks for another glorious Girls recap from Eddie Huang, but we’ll cut the guy some slack. He was probably whelmed after The Great GoogaMooga and had some recovering to do, which was well-deserved after that whole frantically running back to BaoHaus to restock his depleted bao stores, lest the cranky, dehydrated Brooklyners mutiny thing. Anyway, it’s safe to say Eddie loved the shit out of this week’s episode. One, because he straight up admits he loved the shit out of this week’s episode; two, because he deems it the best episode to date; and three, because he writes, “If this was the first episode of Girls, NO ONE would be talking about Game of Thrones.” Preach, Eddie. So, without further ado, here are our 5 favorite excerpts from Eddie Huang’s Girls: Episode 7 Recap:

Re: The carefully crafted soundtrack for the Bushwick warehouse party the Girls found themselves at this week

“Ghostface on Girls? Yes. This episode was full of songs off Baohaus playlists, but such a white Bushwick thing to make Ghostface the first hip hop track played. Remember in college when white kids played “Aint Nuthin But a G Thang” and it was really cool to break up back to back Incubus songs? Well, that’s what the Fishscale album is now. On the other hand, I did like how they played Mark Ronson‘s “Bang Bang” not exactly random cause of the Winehouse-Ghostface bath and body works pumpkin and spice cream days, but I’ll take it. Full disclosure, we’re all guilty in our own ways. When in doubt in the presence of a mixed crowd, I play Chromeo. Shoot me. WHAT UP P!

Re: Shoshana’s accidental inhale of CRACK

SHOSHANA SHAPIRO HAS JUST SMOKED CRACK. I LOVE IT. WHITE PEOPLE SMOKING CRACK ON TELEVISION. LENA DUNHAM I FUX WITH YOU BITCH. Could television get any better? Absolutely not. At that point, I didn’t even care what else happened. They cut to scenes of Marnie trying to tell anyone that would listen about Charlie. There was a moment with Jessa and her Boss. Look, important stories, but NO ONE CARES. We want to see more Shoshana on crack!

It should be noted that Shoshana tweaking is basically regular Shoshana but with scratching.

Re: Shoshana on crack not getting old

The whole time I’m praying that we get a shot of Shoshana pushing a shopping cart of toiletry items with her hair fried and ripped stockings on, please give me this image Lena!

I mean, we were satisfied with pantsless Shoshana running around but we guess Eddie has loftier demands.

Re: Jessa’s rant against the crusty punks

HAHAHA I need that bumper sticker. “You were born on a dirt floor and your mother was poor.” Who needs Charlie Sheen when you have Jessa? I hope OkCupid gets a new function for finding “Users Similar to Jessa”.

We need an OkCupid function for finding Users Similar to Eddie Huang.

Re: How Zosia Mamet deserved an Emmy yesterday

Watching every moment of Shoshana on this show reminded me of the first time I was in some vag. You keep telling yourself, “I’m in! I’m in! I can’t believe the vajay has landed.” But yes, the messiah has landed and Lena blessed us with Japs on Crack. I mean, this scene could be a Bravo show TOMORROW. Fuck housewives, I want Jap Crackheads of Westchester, Jap Crackheads of Beverly Hills, and Basketball Wife Crack Heads. As I’m imagining this growing empire of crack head wife shows, Shoshana Shapiro pokes Charlie’s friend in the eyes, kicks him, and then knees him in the balls for trying to follow her. It is the best fight sequence since last week when Hanna‘s Dad fought the bath tub with his face.

We’ll keep you posted the next time Eddie is feeling inspired. Stay tuned!

[Fresh Off the Boat]