Eddie Huang Interview On Taiwan, Fresh Off The Boat 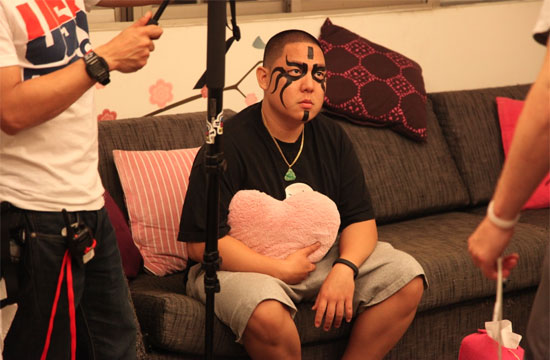 While we ostensibly sat down with provocateur, baomaker, and fly-ass motherfucker Eddie Huang to talk about the second Taiwan episode of his VICE show Fresh Off The Boat, the interview spiraled into a magnificent, vast, comprehensive galaxy of opinions, debates, spiritual FOB interconnectedness, and filthy, filthy pornography.

Part 1 is below, wherein Eddie and The Braiser talk about Taiwanese independence, cosplay, and internal temperatures.

The Braiser: So what can we expect in this upcoming episode for Taiwan? Because judging from the trailer alone, it looks just like dubstep cats and Lolita girls.

Eddie Huang: So this one is cosplay. Basically, all those girls who dress up are as anime or video game characters. And that one was really funny, because everyone’s seen a convention in America. But we wanted to go see them in a convention in Taiwan, and show people how funny it was. My favorite part of the next three episodes coming up is our visit to Yonghe Dou-jiang, or Yonghe Soy Milk, which is the nickname for the place, but the official name for the place is, like, “World Soy Milk King.” That soy milk place was my favorite restaurant I went to in Taiwan in this trip.

They do other things. Pan fried buns that were the best I’ve ever had. They had Taiwanese pastries, sesame pancakes done the right way — not like crazy thick ones that we get out here, you know? That was my favorite moment in the next three episodes.

And then the episode coming up with the death metal — that episode is very much about Taiwanese independence and the politics around it. I don’t have a particular opinion on that issue. I see both sides of it, and I’m kind of neutral on that. But I wanted to talk to a death metal band, [and] I wanted to see what they thought about Taiwanese independence, and why they were so gung-ho about [it] — especially since the fixers on our trip, their feelings were opposed to what the death metal band was feeling.

Were they government fixers?

Here’s the thing. We didn’t want to come to a conclusion on this show. Our goal is to do a Taiwanese independence episode, but we only have seven minutes and this is a food show, still. It’s a culture show. It’s not MSNBC. But I wanted to get around the language of Taiwanese independence. One of the funniest things I got growing up was, “Are you Taiwanese, or are you Chinese?”. I’m Chinese by blood. My parents were born in Taiwan and my grandparents immigrated from China. But with that period in history: people want to explain things in shorthand. They always want to have a three word prefix to explain what you are. That issue is not very well served, I don’t think, by the moniker of Taiwanese independence.

Taiwanese people live pretty independently. The thing they want to fight for is global/political recognition. It’s very much a political fight, and my point when talking to these people was, “Okay, you’re talking about Taiwanese independence, you want Taiwan to be recognized by the United Nations, you want Taiwan to be a state, or an entity of its own.”  Because right now it’s disputed territory.

But if you bring it up with people nowadays in the United States, if they know anything about it, they think, “Oh, back in the 1940’s, Chiang Kai-Shek had this fight with Mao Zedong, and now they’re both dead. So…bleh.“

Yeah! And for centuries there were times where China claimed it, or Japan claimed it, and there’s all this crazy history. But I asked them point blank: “Look, you are very, very much in favor of quote-unquote ‘Taiwanese independence’. On a daily basis, how does this affect your everyday life?” The guys I talked to had some issues in defending their point, and that’s what I wanted to see. “I don’t live in Taiwan. You live in Taiwan. Tell me.”

My approach is cynical: what would I, a normal person living day-to-day, get from this fight? Even in this country, with the health care bill, I’m in favor of it in terms of concept, I’m in favor of it in terms of politics, whatever. But when I started researching it, I was like “What the fuck does this thing do for me? What do I qualify for?” The employees at the restaurant are now like, “Wait: how much money do I not make in order to keep my health insurance?” We’re all confused as shit. So with a lot of political issues, there’s ads to tell us what to think, but I want to know on every issue how this affects me. That was our one goal in doing the Taiwan Independence Episode.

But it was to make a point about how political fights do not, at times, affect the everyday person.

So that’s part of the reason that you made a second Taiwan episode?

I think Taiwan as a country deserves an hour of content…I wanted to show as many different sides to the Taiwanese identity as possible. Most of the time, travel shows just go there and say, “Hey, let’s look at your food.” I didn’t want to do a disservice to Taiwan, and I didn’t want to do a disservice to any city I go to. This was the first international city we’ve gone to, and with every international city I go to, we’re going to try cultural stories.

For acupuncture and reflexology?

I actually don’t do acupuncture as much anymore! I only do it if I get injured, knock on wood, but I just go for herbal medication. He checks my chi every few months, he checks to see how my body’s doing, and then he gives me herbal medicaiton.

So how are your temperatures and internal balance?

Mine are good! My doctor’s always on me to get more rest. Getting more rest is always a good thing. Sometimes I have a heart murmur. Sometimes, when I’m drinking and smoking a lot, I get a heart murmur. But there’s this thing, called suu — do you speak Mandarin?

They’re, like, suu, which means that your body is “hot,” and so you have sweaty palms. [My doctor] will be like, “Did you go to the bathroom a lot at night for the past few months?” And I’m like, “Yeah, I had to pee twice a night every night,” and he’ll go, “All right, your body is holding too much water.” So I think my temperature runs hot.