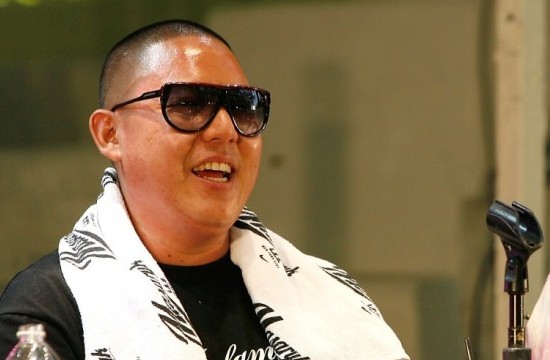 New Yorkers pretty much screamed themselves hoarse over their treatment at the hands of The Great Googa Mooga Festival last weekend. Now that it’s Tuesday and everyone’s calmed down (and Superfly Productions has confirmed that they’re reviving the festival again next year), Eddie Huang ran this piece in The New York Observer, candidly describing his weekend; and for your information, it went very well, thanks for asking, “dickheads.”

Googa Mooga was generally a great idea, “but they made one big mistake,” argues Huang. “They did it in Brooklyn.”

If I was going to start a new venture, Brooklyn would be the last place I’d go. Brooklyn hates things just to fall in love just to hate them all over again. There was no way a food festival could make Brooklyn happy…The problem is the crying, pissing, shitting parade of babies taking Brooklyn over.

Huang points out, rightfully so, that the chefs and vendors aren’t to blame for the shortages (but was anyone really blaming them?), and that they planned the shit out of this festival given what they’d expected. But then, “like a monsoon of uncontrollable soul burning diarrhea, the foodies descended upon us.”

We knew the fuckers were coming, but none of us had ever seen it on this scale. By 1pm it became clear that most of us would run out of food before the day was up. It happens at every festival, but this was an avalanche. We frantically called our restaurants, rallied our staffs, and radioed for reinforcements as barbarians stormed the gate frothing at the mouth for horse meat bologna and foie gras.

What does “Flight of the Valkryies” sound like when covered by MGMT? Because that’s pretty much the soundtrack to what Huang describes in this article.

Still, he and his fellow restauranteurs rallied after Saturday and kicked the shit out of Sunday’s crowd, a feat which makes him proud, despite all the “fuckers” who freaked out and/or wanted to see foodie culture die a greased-soaked death in the sunlight of Prospect Park. “It’s easy to talk about ‘rock stars,'” he noted, “but it’s another thing altogether to stare down a park of 35,000 people and perform.”