Tonight in Food TV: A Top Chef-testant Calls Eddie Huang a Douchebag, Is Dead to Us (UPDATED) 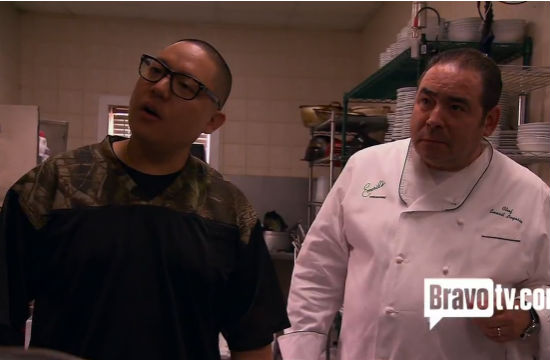 Travis Masar’s team apparently left their lemongrass at Whole Foods, and so he’s stuck cooking without it, for which Eddie obviously gives him shit.

Travis’s measured, mature response: “Eddie’s Taiwanese-Chinese. He only knows a little bit about what he knows. Sorry, Eddie. You’re kind of a douchebag.”

WHOA. Hey. Whoa. It’s his job to make fun of you, number one. Number two, WHO insults the guest judge they’re cooking for in a challenge? Was anyone like “Ugh, whatever, Paul Prudhomme is like, senile…” on last week’s episode? OF COURSE NOT. Travis better check —

…Oh. Hold on. This just in from The Braiser Staff, featuring resident Vietnamese Cuisine Expert Tina Nguyen, and the author of this post:

tina: …oh
my god
I’m gonna have to side with the white dude against Eddie Huang
mariella: WHAT
my whole post is about how this guy is dead to us
tina: white boy is right
there’s so much stuff in the vietnamese repertoire that has nothing to do with lemongrass
I mean, sure, I keep frozen lemongrass in my fridge
but most, if not all of the time
I’m cooking stuff with fish sauce, soy, tamarind
limes like whoa
mariella: can i copypaste this gchat into my post?
tina: hahahaha yeah
also please add that if I ate lemongrass all of the time I’d be a goddamned tree by now
and also say that I, Tina Nguyen, am accusing Eddie Huang of stereotyping
now, if white boy was like, “I’m not using fish sauce,” then I’d be pissed
but lemongrass is not The Holy Ingredient
mariella: we should stop “writing” “posts” and just publish excerpts of our gchats instead
The New Braiser
The new obnoxious, millennial-run Braiser
tina: hahahahahahahaah
tina: if this is indeed The Seafood Challenge, I’d probably do a fish stew
tamarind paste + pineapple + tomato + weird vietnamese plants + All The Fishes
but what do I know, I’m not a Cheftestant
tina: DUDE do you know what the Nguyen Emperors used to eat for imperial feasts?
rhino skin and bear paws
fuck you, eddie, I bet those were never sauteed in lemongrass
mariella: we’re still on-the-record
tina: I would like that to go on the record
mariella: On The Record, Fuck You Eddie?
mariella: i’m proud of us for evolving as a site. growth is important
tina: hhahahaahha
okay maybe “fuck you eddie” is a bit strong
how about “hey guess what, Eddie”
mariella: that’s great. i love a good backpedal

We’re on the cusp of New Journalism, folks. Get ready. Oh, and watch Top Chef tonight. Here’s the clip. (On the record, the author still thinks it’s disrespectful to call a judge — who is ostensibly in the position of judge, and not that of cheftestant, because he is more knowledgable and/or successful than you, White Boy — “a douchebag.”)

UPDATE: Eddie emailed us to clarify that his critique in a trailer devoid of any context was more about a failure in planning than anything:

“You know I’m not an idiot. Why waste time on a conversation about whether you can cook Vietnamese food without lemongrass? The answer is obviously YES. Lemongrass, no lemongrass, doesn’t matter, but he planned to make a dish with lemongrass and forgot it. But I’m the douchebag. I get it lol.”

Boys, boys, you’re both pretty. And now we can’t wait to see if punches were thrown at judge’s table, because LIFE IMITATES ART.

RELATED:
We Dare You to Watch Top Chef at Commander’s Palace and Not Get Goosebumps (VIDEO)
WATCH Leah Chase Talk About Hurricane Katrina on Top Chef, We Dare You Not To Cry
WATCH: Top Chef New Orleans Cheftestants Rattle Off Their Michelin Stars, James Beards