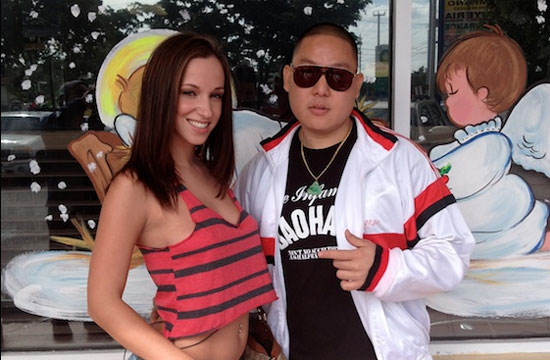 After a long conversation with Eddie Huang about his time in Taiwan shooting an episode of Fresh Off The Boat, we moved on to his finale episode in Miami and more salacious topics — topics that I, as a woman, felt surprisingly comfortable talking about with the provocative restaurateur. However, that doesn’t mean the following conversation is in any sense tame, polite, or Pope-friendly. If you are a child or easily offended, please proceed with caution.

I wanted to jump to the episode after [Taiwan], which is set in Miami [and will air in February]. In a conference call from earlier last month, you mentioned that one of the locations you visited was the Bang Bus. So for the people out there who don’t know (which I imagine consists of no one, but for their sake), could you explain what the Bang Bus is?

Obviously, this is kind of an unusual place to shoot a travel food show segment. Why did you pick the Bus? How did you even come up with this idea?

This is the thing with food: When the food world tries to be “edgy,” it’s so bad at being edgy. People get such a kick out of the word “food porn,” and then the people that the food world tries to label as “bad boys” and “troublemakers” — I’m really not a bad person. I’m just a goofy kid. I like to cause trouble, and I like laughs, but I’m not, like, a bad guy. But the food world…this industry for the longest time was trying to serve stay-at-home moms, and people who watch daytime television. Their standards were such that the conception of “edgy” or “pushing the envelope” are, to me, just like, child’s play.

Right, I understand that, but [the stunt] is going to cause a lot of controversy. Lots of fainting and smelling salts.

What I was meaning to say was, that’s how I feel about it at times. There are all these blogs, there are all these websites, and at the end of the day, the news on it really is not that risque. I don’t see too much on there, day to day, that’s edgy or radical or really just, “Wow, that’s really interesting what they’re talking about, or what this person is doing.”

(Solemnly.) These people dropped fucking lobster sauce all over this van. Everywhere. And, you know, it was wild.

So who did you end up eating with? Could you tell us a little about her?

We ate with Jada Stevens. She was awesome! It’s a cliche to say that she’s a nice girl, but she was really fun. I like Jada a lot. She was very forthcoming about how this is a business for her — here’s another cliche, she wants to be a marine biologist — but she’s serious. She supports her[self], she supports her mom. I think I’m part of a generation that doesn’t stigmatize porn stars as bad, or even as hoes. I see them as businesswomen… This girl, she treats it like a business. She has bodyguards everywhere she goes — in many ways, her life is run like a boxer’s. She has the same bodyguards that Floyd Mayweather had. Like, the money team. But Floyd boxes, and she fucks.

Did she bring any perspective from her industry to the food at all?

I think most men would say that, but they won’t say it out loud. Except you just did, so congratulations!

You know, I think in this current time right now, people think I’m crazy, or people think I’m ridiculous. But I think I just want to try and cut the crap, and pave the road, so that other people can speak their mind on these topics. That’s what I’m doing with this show.