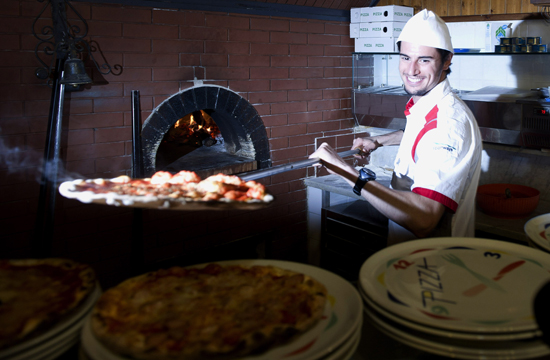 Although Italy’s fallen victim to numerous economic woes recently — austerity cuts, the fall of the euro, and Silvio Berlusconi’s presence among the living, to name a few — there’s one sector of the economy that is actually booming: pizza. While we’re well aware that this is a joke handed to us on a giant silver platter (“Mamma mia! The economy, it-a run-onna pizza!”), the Telegraph reports that pizza’s relative cheapness has turned it into an “increasingly popular lunchtime option,” and the industry needs about 6,000 pizzaioli, or pizza makers, to meet demand. While young Italians don’t seem to want these jobs, Egyptian immigrants are more than happy to start slinging dough.

“I would say about 80 percent of Egyptians who come to work in Italy end up as pizza makers,” Amadeo Al-Wikel, who runs a pizzaria in Rome after emigrating from Cairo 12 years ago, told the Telegraph. According to the sources quoted in the article, it’s not a matter of Egyptian immigrants taking jobs from struggling Italians, but rather that Italians, particularly the younger generation, just can’t be bothered to take on such a laborious and low-paying positions. “The Italian mindset is that being a pizza-maker is humiliating, it is a manual labor job,” says Alessandro Rossi, an Italian pizzeria owner who points out that unemployment among young Italians currently hovers around a staggering 35%. “Young Italians want to own 40,000 euro cars and wear nice clothes but they are not prepared to work for it. So the gap is being filled by the Egyptians, the Filipinos and the Arabs.”

(If we can quickly interject with American jingoism: our college-educated young people are putting themselves to work by opening up their own hand-crafted, wood-fired pizzerias. Yes, we’re saying it: hipsters are the engine driving the U.S. economy.)

This isn’t a new trend, however: Egyptians have been stealthily infiltrating the pizza market since 1999, not only supplanting a younger generation of Italians who had lost interest (and were also called lazy in 1999), but also bringing pizza back to Egypt (with the best ads ever). But before we rev. up our xenophobia-accusation-engines, the Italians quoted don’t seem bothered at all by their newfound countrymen manning the ovens — the consensus appears to be that Egyptians, now, make the best pizzas.