Emeril Lagasse Defends BP: ‘Those Guys Stepped Up To The Plate And They Did What They Had To Do’ 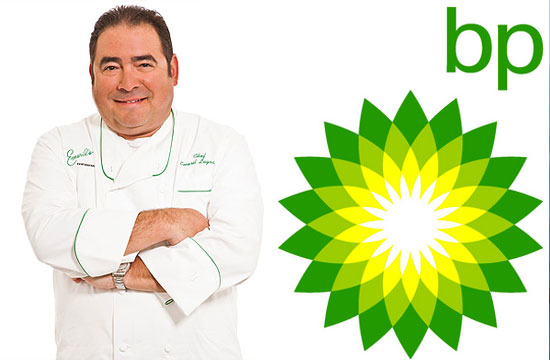 Midway through the super double secret filming of Top Chef: New Orleans, Emeril Lagasse took some time out of his production schedule to pump up the Times-Picayune with hot, juicy Magical Elves gossip, which he can’t actually tell anyone, because of nondisclosure stuff. But he can talk lovingly about being back in New Orleans, where he got his break as the chef of the legendary Commander’s Palace, and how he’s glad that BP’s taking responsibility for their accidental destruction of the Gulf Coast back in 2010. Say what now? Weren’t we all supposed to be furious about the fact that Bravo accepted a BP-funded sponsorship from the State of Louisiana?

“The first thing I want to say is, I’m not really involved with the business aspect of what [Bravo’s] done,” he clarified, “so I can’t really talk about that.” But as one of the most prominent restaurateurs in New Orleans, Lagasse could speak to how BP helped him, and thousands of other restaurants in the area, recover.

(The spill) had an economic impact in New Orleans and the surrounding areas, all the arms and all of the legs that that involves. Whether it’s the processing plants, whether it’s the local fisheries, whether it’s the consumer, etc., etc. — it affected a lot of people economically…. If you look at most restaurant menus in the city of New Orleans, probably 60 percent of the menu is some sort of seafood or shellfish…

The good thing, if there is a good thing, about that is: People can criticize BP all they want, but those guys stepped up to the plate and they did what they had to do. Not only here, not only in Mississippi, not only in Alabama, not only in Florida – they took it very seriously.

Technically, Lagasse and BP are correct: the seafood caught or raised by commercial fisheries in the Gulf is perfectly safe for human consumption, and hell yes, people should go to New Orleans and stuff their face with gumbo and étouffée for weeks. But the haters at Louisiana State University would like to rain on your Mardi Gras parade and point out that leftover oil in the sediment at the bottom of the Gulf has been adversely affecting killifish, a species on the bottom of the marine food chain.

“All of those fish we like to eat, eat the killifish,” environmental toxicologist Andrew Whitehead told the LA Times, comparing the situation to the long-term aftermath of the Exxon-Valdez spill. “All of our health data do tell us the fish is safe, but the unintended consequence of all that is we think we’re out of the woods.”

Okay, maybe that’s us being nitpicky, but that’s how ecosystems roll: mess up one part of the equation and then everything falls in on itself. And say what you will about Top Chef boosting the tourism and restaurant economy in the near future — we’d prefer to see those restaurants still in operation in the next fifteen years, too.