Everything is Awesome: Art Smith’s 101 Gay Weddings, With Guy Fieri (!) As Officiant 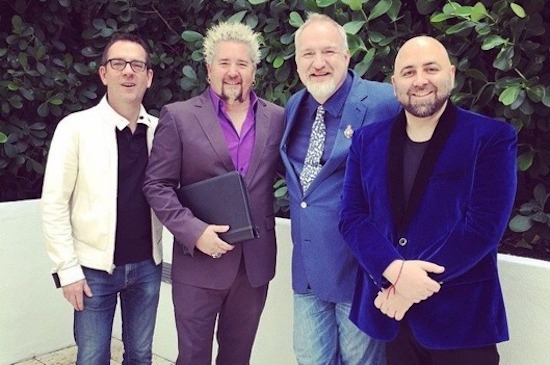 Will anything make us happier than seeing couples in love with chef Art Smith and Guy Fieri by their sides? Probably not.

Finally, the big day at South Beach Food & Wine Festival arrived: the day of 101 Gay Weddings, planned by Art Smith. Back in January, Smith told The Braiser how he wanted to help gay couples in Florida marry once the gay marriage ban was appealed (and even threw in a free Disneyworld honeymoon for the couples). Joyfully, he, with the help of his husband Jesus Salgueiro, Ted Allen, Duff Goldman, and Guy Fieri, did just that.

The Associated Press reports that the event was a success: the seven-layer cake made by Goldman was a smash hit, the dance party was killer (those pictures), and that the ceremony was especially touching. In fact, reports say that Fieri said he officiated the ceremony in honor of his late lesbian sister.

Oh, and check out Fieri’s baller suit. In the words of the Lego Movie, everything is awesome.

Was an honor to be part of such an amazing day for so many loving couples #101gayweddings #sobewff pic.twitter.com/DP6olKrToK