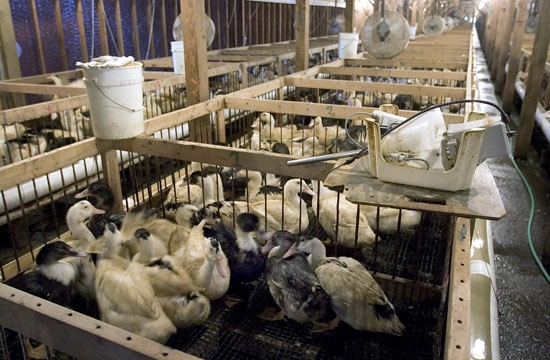 An amendment added by the House Agricultural Committee to the current draft of the Farm Bill being debated in Congress could overturn one of the most controversial laws affecting the industry today: the California foie gras ban.

The amendment, which was introduced by Rep. Steve King (R-IA), took aim specifically at California’s “activist” agricultural laws, and says that a “state which objects to the way that a product is produced in another state, cannot prohibit the sale of that product in their own state”.

In an interview with The Sacramento Bee, King argued that California’s laws, such as the foie gras ban and a 2010 law banning the sale of eggs from non-humanely raised chickens, were in violation of the Constitution’s Commerce Clause, which grants the federal government the power to regulate interstate commerce. “If California wants to regulate eggs that come into the state, fine,” King said. “But don’t be telling the states that are producing a product that’s already approved by the USDA or the FDA how to produce that product.”

Though this is the same argument being made by the coalition of farmers and restaurant owners challenging the law, a Congressional challenge to the foie gras ban would have a more immediate impact on the statute: since the previous Farm Bill expires on September 30th, Congress is under pressure to approve the new, five-year-approved, all-encompassing agriculture bill before they go on their three-month recess beginning in August.

And the amendment seems to have near-unilateral support: Out of the 46-member House Agriculture Committee, only two spoke out against it.