Study: Your Overweight Friends Determine Where You Sit, and How Much You Eat When Dining Out 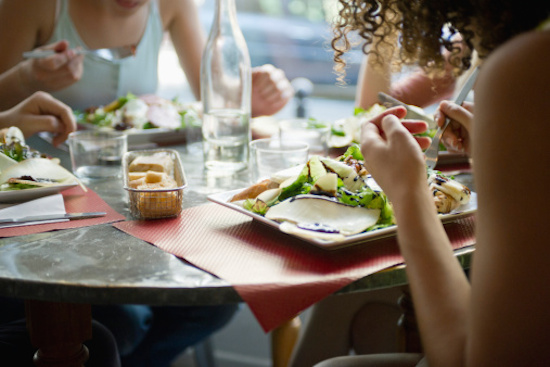 Here it is — “the fat suit study” here to show us how the fatties in our lives are ruining dining for all of us. /sarcasm

It’s all kind of shit news, really. Brian Wansink, Cornell University professor and co-author of the study, used an “overweight prosthesis” in order to figure out whether or not overweight dining companions effected how others eat around them. According to the study, in the mere presence of said actress in a fatsuit, her dining companions were likely to eat less salad around her because “probably because the health commitment goal is less activated.” “More generally, this study provides evidence that the body type of an eating companion, as well as whether she serves herself healthily or unhealthily, influences the quantity of food intake,” concludes the abstract.

Meanwhile, an excerpt of Wansink’s book Slim by Design starts with such a delightful phrase that we hope to wash out of our ears, effective immediately: “Are there ‘fat tables’ in restaurants? This is preliminary, but so far, our research suggests: maybe!”

Was the exclamation point really necessary?

In short, Wansink and his Cornell University authors visited 27 restaurants across the country, mapping their layouts and where people sat. Among their conclusions?

“People sitting farthest from the front door ate the fewest salads and were 73 percent more likely to be obese.”

“People ordered healthier foods if they sat in a window or a well-lit part of the restaurant.”

“The closer a table was to a TV screen, the more fried foods they bought.’

So you know, if you are over a size 12, maybe just avoid going out altogether, lest you sit in the weird back corner to gouge on cheesecake while everyone resents you for making them eat unhealthy foods.

[Food Psychology, Science Direct, The Science of Us]