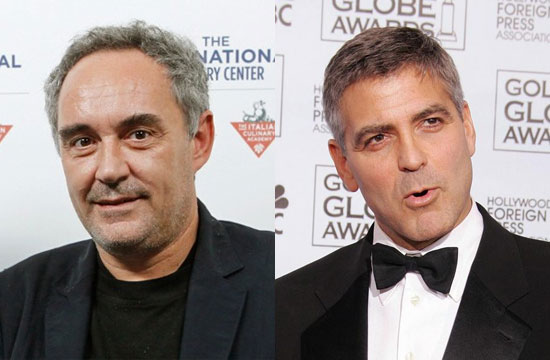 “Cooking In Progress”, a documentary about a season of the dearly-passed El Bulli comes out this month. And as the Telegraph interviewed Ferran Adria for a very lengthy profile on his next move, the inevitable question arises. But it’s none of the Inevitable Questions you’re thinking of — “What’s your vision for the el Bulli Foundation?”, or “Who do you think is your natural heir?”, or even “What do you think about that ‘Certain Foul-Mouthed Scottish Celebrity Chef’?”

The really important question is, of course: Who would play you in a movie about your life?

Brad Pitt? George Clooney? [Adria] snorts. “I don’t want a star,” he says. “You don’t believe in a famous actor playing someone equally famous who’s still alive. Look at Will Smith playing Cassius Clay. You’re always comparing him to the real thing, to his detriment.”

Adrià himself references The Social Network as a conceptual template – “some fact, some fiction”.

Oddly enough, someone actually did try to make a feature film about Adria’s life, but The Sorcerer’s Apprentice, based on a novel of the same name, never did make it past the Hollywood treatment phase. But really, shrugs writer the Telegraph’s Stuart Husband, such a movie would inevitably be a hybrid of “vintage Peter Greenaway…and a sort of Zoolander for foodies.”

“When, in Cooking in Progress, Adrià clangingly intones, ‘Don’t bring me anything that’s not good,’ or a critic writes that ‘Ferran Adrià did not feed us, he deflowered us,'” Husband writes, almost giggling, “it’s hard to keep a straight face.”