FEUD: Bourdain Blasts Fox After They Complain About His Cursing 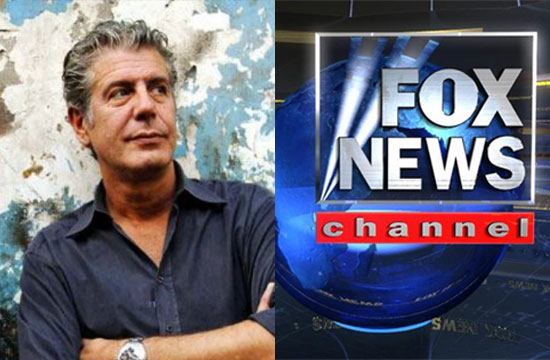 And, oh goodness, he’s swearing so much on CNN these days with his new show Parts Unknown, dirtying the prestigious network with phrases like “shit” and “fuck” and  “prolapsed butthole”. According to Fox News pop culture writer Hollie McKay, the fact that CNN has allowed this unsophisticated prole onto the airwaves, swearing un-bleeped to his heart’s delight, means the network is using Bourdain’s foul mouth in “a desperate attempt to stay relevant.”

Poking fun at CNN’s sluggish ratings and journalism mistakes may be a favorite pastime of ours, but McKay unfortunately got many things wrong in her article — which doesn’t even mention the name of the show full of the offending chef swears. (Did she even watch it?)

First, contrary to McKay’s statement, Jeff Zucker was not responsible for Bourdain’s appearance on CNN, or his potty mouth: the former NBC CEO took over the cable news channel in January of this year, whereas Bourdain signed onto CNN in May of 2012.

Second, “prolapsed butthole” isn’t a swear word, it’s a medical term. Plus, it’s fun to say. Try it, it rolls right off the tongue.

Third, Bourdain has gone on the record saying that he’s pretty happy that he hasn’t been actively bleeped on CNN — instead, whenever he swears, the sound is simply edited out. No one actually hears him swearing, and thus, any offending s-words are really all in the imagination of the viewer. For instance, let’s play “count the swears” in this video:

If you heard more than one instance of the s-word, congratulations, you’re just trying to find controversy.

Fourth, to Bob Waliszewski, director of Plugged In, which reviews films, TV, video games, and songs for family-friendliness, saying:

“A television host can boost ratings one of two ways. Great TV or shock. It’s a disappointment to me when coarse language is used as an in-your-face way of saying, ‘Hey, notice me! I’m on TV’… Will people notice? Sure. For a short while only.”

Can he explain why Zero Point Zero’s successfully made some variant of this show for the past thirteen years? Or why a family should make their children watch CNN to begin with? (Syrian guerilla warfare; fun for the whole family!)

Fifth, it all led to yet another edition of Anthony Bourdain’s Family Friendly Twitter Rampage wherein he pointed out that he also happens to be an employee of FOX parent company NewsCorp:

Hasn’t FOX pretty much pioneered the loosening of standards and practices on both broadcast and cable? foxnews.com/entertainment/…

FOX might have mentioned I work for the company #AnthonyBourdainEccoBooks #companyman — Anthony Bourdain (@Bourdain) April 23, 2013

If FOX has problems with my potty mouth, their sister company can easily choose to stop profiting from it! #HarperCollins #BourdainBooks

Why do we have to fight, people? Why is the moral degradation of society so dependent upon whether Anthony Bourdain says the F-word while eating bibimbap? Is it just because it’s on CNN? Is CNN a home of angelic beings with pure mouths and snow-white hair? Can’t we just say “prolapsed butthole” and not be shocked by it anymore?

Take this bit of prolapsed butthole as a peace offering: it’s really a dumpling, so calm down.