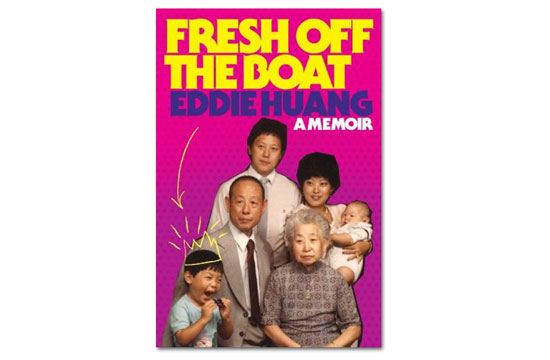 Other minds can dissect Eddie Huang’s memoir as a work of literature and try to fit it in whatever niche they can, but I can’t — and I won’t. To be honest, I had such a visceral, gut-wrenchingly personal reaction to Fresh Off The Boat that as a result, it’s impossible for me to review it on its literary merits, as simply a book to read on a Sunday afternoon with a mug of tea. Granted, the majority of people who read Huang’s memoir will enjoy it that way, but I am — as much as I hate to admit it — an Asian-American writer. (Telling, isn’t it?)

I wanted to write an entire review involving statistics and historical footnotes to illustrate the cultural significance of this book. I would have loved to reference the fact that Huang is of an age cohort that grew up here, long after the Immigration Act of 1965 allowed mass Asian immigration into the country, or that he’s of a completely different generation from the big-name Asian-American writers like Amy Tan, Jean Kwok, and (god forbid) Amy “Tiger Mom” Chua. And I really wanted to make a point about his gratuitous use of pop culture, or his fluency in Western literature, and point out how no one in the yellow canon has a voice so infused with youthful American-ness.

But that would be an academic, bloodless way to skirt the point, and that point is this: This book illuminates the modern Asian-American experience in a way that other writers have not, or could not, articulate. He did it so well that I want to punch him in his round little Chinese face.

Honestly, I’m stunned by this book. I have never read a book that got the young Asian-American experience — and, I imagine, neither has any other young Asian person living in the US, either. True, on the surface, this food memoir is really good at evoking those specific Asian childhood food memories: the smell of cold rice in tupperware lunchboxes, the joy of weird stir fries and stews and barbecued meats, and the speed in which that joy turned to shame when all the other kids had Lunchables. But on a deeper level, this book addresses the issue of Asian-American identity — and it doesn’t really matter where those Asian-Americans have come from.

By all accounts, my experience is the complete opposite from Huang’s: my own broke, FOB-y Vietnamese parents moved to Irish-saturated Boston, knowing nothing about how power and status operated in America. For some reason, a freak twist of fate got me enrolled in an elite prep school, one of those academies where the kids of US Senators lived ten months out of the year. While Huang grew up coveting The Chronic after listening to his friends play it on their boombox, I yearned for American Girl dolls when, at the age of seven, I was the only one with a Barbie at an American Girl Doll-themed birthday party. (Yes. It was that white.) Etcetera.

The fact that Huang’s memoir — so jam-packed with hip-hop, historical and literary references that at times I wondered if he needed a companion reference guide to accompany it — could leave an awkward whitewashed Asian gobsmacked is reason enough to buy this book. But the underlying story — the narrative of being a young Asian in America, soaking in pop culture and American culture and figuring out which ethnic group they’re most like (as long as they’re not too Asian; who the hell would ever choose to be Asian?), wondering whether they’re minorities or model minorities or just lame, Chink-y joke fodder, wondering whether they’ll have the same type of power that other minorities do, and wondering whether they’re even allowed to express how confused or angry they are at the cultural status quo — well, no one who’s ever considered themselves Asian has ever voiced it so forcefully.

Frankly, Huang’s fluency in rap might have something to do with it. Too often, people dismiss the “Eddie Huang Likes Rap” phenomenon as the result of other Asians reading his blog and thinking, “Oh man! I fux with Ghostface too! Eddie Huang, you’re our AZN hero! <(^_^)>” In reality, it’s the medium he speaks in that resonates. Throughout the book, he credits hip-hop and rap as the most socially relevant and powerful artistic medium in our culture, particularly in its ability to channel anger into lyrical social critiques. He’s taken those lessons to heart, clearly, and the resulting prose fires like a gatling gun.  And while the questions he asks with that prose may have been asked before by countless Asian-American writers, no one asks them like Huang — and no one tries to make sure those questions are heard like Huang does.

But the biggest question provoked by Huang’s belligerent, smartass authenticity, and his demand to find his place in America, came with an uncomfortable fear: Have I sold out? I don’t speak Vietnamese, I rarely hang out with Asians, and, after one ex-boyfriend sent me this article as proof that he liked me, I stopped talking about Asian issues except as an academic topic, as if my entire race existed in a Petri dish. In my own quest for social self-preservation, have I become a Twinkie? Secretly white on the inside and just as artificial? I’ve definitely pondered this question while reading the canon of Great Racial Identity Memoirs (Hello, Dreams Of My Father), but I’ve never been pushed to confront it. And I certainly didn’t expect that a loud Chinese dude with baggy pants would hit me in the face with it.

I can’t answer that question right now, and I don’t think Huang could possibly provide the answer. I imagine that we have a bunch of opinions about Asian-Americanness — political power, culture, and self-identity — on which we disagree, and maybe we’ll even fight to the death in trying to resolve them. (Look out, Eddie.) But Huang has done the unthinkable and forced me — in the most evocative way possible –to answer the identity questions I’ve been consciously avoiding for twenty-odd years. And that, for the unknowing racial sellout, is a huge wakeup call.

Fresh Off The Boat is available now in bookstores and Amazon.com.