Fresh Off the Boat Recap, Episode 6 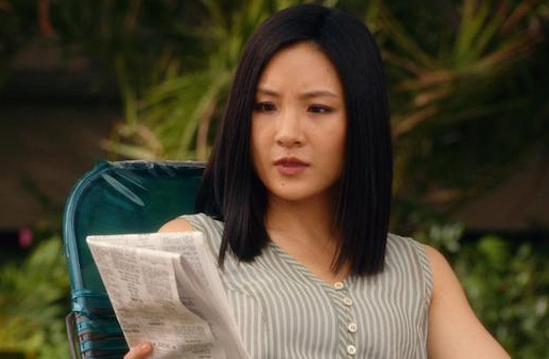 The family is loitering in the frozen food aisle because Mom won’t turn on the AC. This becomes a running theme throughout the show that I don’t even know how to make sound funny — this is not starting well.

Baby Eddie Huang seems to be fitting in more at school and is bonding with the kids over a new video game — Shaq Fu!! A basketball player teaching karate! It might be funny if it wasn’t actually true. Eddie wants it, but he needs $50 for it. I think we all know where this is going — time for another Eddie scheme!

First he tries to hit up Mom, and we all know this isn’t going to go well! It’s a heatwave in Orlando and she won’t even turn on the AC! Too much money! Too many exclamation points!!

He then tries Dad, who won’t give him the money either. Instead, Dad comes up with the idea to have Eddie help out with his latest restaurant scheme: FAJITAS! Mom is against it: “No way white people will eat meat out of a pan.” Ha! I know many who will. Dad disagrees and makes Eddie into Fajita Man! Fake mustache and all, because mustaches on kids are funny (if this were Leave It To Beaver.)

I’d like to interrupt this recap to say that Grandma and the other two sons who aren’t Eddie seem to be so expendable. Mom did say earlier in the episode she “could get by with only two sons” — it might be time to make it happen. It’s like they are getting paid to be on TV and do nothing — please, someone tell me how to get that job.

Mom also needs a job and gets to veer off into her own storyline, searching for work and a cool place for the other two kids to hang out (since they aren’t doing much else). You know, because she won’t turn on the AC. Which was only kind of funny the first time. From here on out it’s just Mom dragging the other two sons around town until, light bulb! She hits on the idea of camping out at open houses for the AC while she peruses want ads. Yeah, sorry, I still don’t know how to make it sound funny, and it seems neither did the writers.

Eddie takes up his Dad’s offer to serve fajitas to guests and by the end of the week his “fajita game is straight up nasty.” Then he gets his first paycheck, minus plates he broke and food he dropped, (what no FICA!). Uh, burn. He decides to just ditch his next shift. Christ, I feel another father-son bonding moment coming on. But wait! Grandma has something to say! Something about Dad’s father being hard and blah, blah. Then next we know, Dad gives Eddie the money for the game, which he then buys. But sweet Eddie has a change of heart and shows up for his shift pushing fajitas. Which can only happen when you work for a relative; otherwise, anybody else’s ass would have been fired. Been there! Eddie’s real comeuppance happens when “Shaq Fu” turns out kind of sucky (kind of how I feel about parts of this episode). Seems the video game to get was 9 To 5 based on the movie of the same name. I wonder if Dolly’s boobs were big in that too. Twelve-year-old boys would like that better.

Mom figures out that she’s actually legit at selling houses, although bad at spotting the gays. Which I find odd as they moved from Washington D.C., a town with as many gays as Republicans. And really, were there actually out gays in Orlando, Fla. buying homes together in 1995? I’m calling the big BS on this one. Anyway, Mom decides to become a realtor and whatever and they all celebrate by turning the AC on low and dancing around the house, calling Mom a “real estate pimp.”

Outside of the two servers at the restaurant having a fight with their fajita hotplates, I’m exhausted. They were trying as hard as I was to make this episode funny and sadly, I think we both failed. It’s like there is one writer on the show who comes up with two or three funny lines for Mom. Why can’t they write the whole show? How many more episodes are there again?