Fresh Off The Boat Recap, Episode 3

Fresh Off The Boat Recap, Episode 3: “The Shunning” 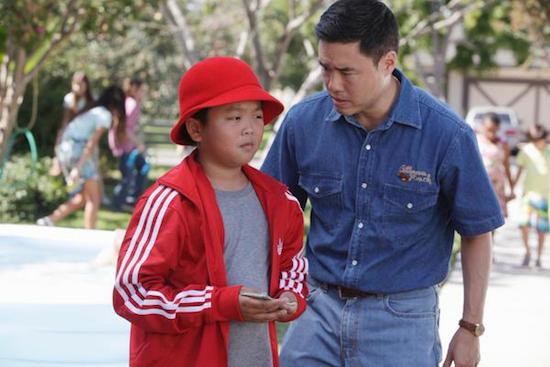 Before I turned on the latest episode, I kept thinking to myself that maybe I just don’t get the experiences of a young Eddie Huang because I’m not Asian-American. I talked with my friend Olivia, an Asian-American girl raised in the Midwest (not as bad as Florida but still). She watched the show and felt a lot of the stuff was what she and some of her friends remember from childhood. She had a few laughs but said it wasn’t funny enough. Well, at least my humor bone wasn’t broken. With that small hope I plopped down on the couch to see what this week’s show had to offer.

Eddie’s still trying to fit in at school and thinks a new pair of Air Jordans will do the trick, instead of a new attitude. Then there’s some line about the black kid not needing them: “He doesn’t need to; he’s black. That’s like built-in Jordans.” That’s like casually racist instead of full-on. Eddie knows he won’t convince his mom because she’s cheap. More stereotypes for the win.

Meanwhile, Mom is also having trouble fitting in. Her stinky tofu doesn’t go over well when she lunches with the roller-blading moms. Still, I very much like her take on the day’s popular TV shows: “So Melrose Place is about prostitutes who are mad at each other.” I think I chuckled (and by the way, yes it was).

Mom learns at the socially awkward lunch that there is a block party to celebrate the Daytona 500. Dad thinks it would be a great opportunity to make friends and promote the restaurant. Mom doesn’t want to since it will be expensive to serve up food to the neighborhood. Things are so bad “Stephen King should publish their checkbook!” See, she reads Stephen King novels when she’s sad and their finances are scary and he’s a scary writer and not funny.

Dad says they just need to project success to achieve success. Cue back to young Eddie — Eddie hears this and after an elaborate rap video dream to Ol’ Dirty Bastard, he decides that a hot girl is his way to school respect.

Into the Huang family’s lives comes Honey, the smokin’ hot second wife of their neighbor. They run into her at the video store while renting NASCAR films (wow, didn’t realize that was a thing in the ’90s). Mom and her bond over Stephen King movies and Eddie tries to hit on her by buying her some Skittles. He tells her to “Go on girl, taste the rainbow.” Wow, I want to say it’s funny, but it comes off creepy.

Mom begins to bond with Honey, except wait — Dad learns she is hated by everyone in the neighborhood. He says they can’t be friends anymore as it could ruin their standing in the neighborhood and hurt the restaurant. How do they learn all this? From the youngest son, Evan, who’s a part of the party-planning meeting and drinking tea with the roller-blading moms. He’s gossiping! He’s learning all of the dirt! Little kids acting like adults –why is that supposed to get laughs? I just don’t get it. In the end, Mom agrees to not be friends with her because the restaurant comes first.

At the block party, Eddie, wearing his best LL Cool J outfit, devises a plan to get Honey to be his girlfriend by using all his best hip-hop moves. He even pulls the whole it’s raining money thing on her like she’s a stripper. It’s all really awkward and mildly offensive. It’s at this time Emery, the middle son, chimes and tells Eddie, “real life isn’t a rap video.” Then he goes on a speech about love while sitting in a kiddie pool with his arms around two different little girls. Were kids seriously doing this shit in the ’90s? Even with all the DARE drug stuff going around? This whole episode is just one big creepfest.

Meanwhile, Mom does her best to avoid Honey and bond with the blading moms, as one does during karaoke. But it’s during the heartfelt instrumental tracks that she has a change of heart at the last minute, and sings “I Will Always Love You” to Honey. Yeah, they make up and are friends again. Because of that, Honey le’s Eddie give her a 3-second chest-to-chest hug in front of the other boys to get his cool on. When he grabs her ass she shuts it all down. I think I feel a little skeezy watching this. A shower, I need a shower.

Right after the hug a new girl comes into Eddie’s view. It’s Nicole, Honey’s stepdaughter. Eddie’s voiceover: “At that moment, I knew what Emery was talking about, the pain of Cupid’s arrow.” And then he gets hit in the back with a lawn dart. (Damn, that was a fun game!) Uh oh, cue the hilarious lawn game accident! “Someone call an ambulance! There’s a hospital right next to Cattleman’s Ranch!”

Just like that, they all come back from the hospital. Mom’s made a new friend and Eddie’s mad in love as he stares at Nicole in her window (are they pushing the lovelorn child image, or just the all-out creep?) and she gives him the finger back. I’m exhausted.

I still find the abrasiveness of Eddie unappealing. He’s trying to hard to be both a rebel and fit in. Fortunately, it is a theme directly lifted from the Huang’s memoir — “I was a loudmouthed, brash, broken Asian who had no respect for authority in any form.” The show seems to have gotten that right at least. Trying to make him funny seems to be a bit harder. Can’t wait to see what the ratings will be for this week’s episode.