Fresh Off The Boat Recap, Episode 7 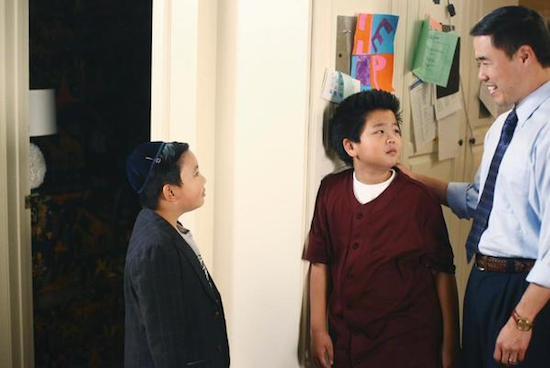 Eddie is trying to make a new friend! There’s a new kid named Phillip in school and he’s Asian! They now outnumber “the black kid!” Eddie thinks they can be friends and he can get himself a crew. Turns out the kid was adopted by Jewish parents and grew up in Jerusalem. Eddie’s response: “That’s cool, we both have pushy moms and eat Chinese food for Christmas.” Hmmm … smacks vaguely of racism and stereotypes? OK, maybe not so vaguely.

Surprise! They have nothing in common: rap versus classical, Shaq versus Tolstoy, stinky tofu versus gefilte fish, Hangin’ With Mr. Cooper vs. hangin’ with God. I just want to raise my hand and say nobody should ever have to “hang with Mr. Cooper,” it was a terrible show. “Hangin’ with God,” that might have some promise. Eddie and Phillip realize they don’t like each other all that much. Finally! Someone spoke the truth!

Unsurprisingly, all the teachers keep putting them together because they think they might just have something in common. (You know, Asian — sshhh.) To combat complaints of racism (from Eddie and Phillip), the principal creates the Pacific Rim Club. In Florida in the 90’s, it means an after-school club with just Eddie and Phillip.

Meanwhile, back at the restaurant … now that Mitch the host has defected to the other steakhouse, Dad needs to hire a new host. His prayers are answered when in walks a hot cowboy named Wyatt! Which, lets face it, is the answer to a lot peoples’ prayers. Plus, he’s played by Parker Young, aka someone you need to Google (shirtless image). If he becomes a regular, I might actually have to like this show.

When Mom gets to meet Phillip, she instantly falls for him. He plays cello, studies hard, practices all day — the perfect Chinese son of Jewish parents. Eddie sees this as an opportunity to get his Mom to let him go to the Beastie Boys concert (wow, took half an episode to get to another scheme. This show is becoming more and more like Leave It To Beaver).Phillip is also a schemer — wait, they do have a lot in common. Phillip wants to go see Les Mis but it’s on Shabbat. If Eddie takes him to see Les Mis Phillip will go to the Beastie Boys with him. Schemers gonna scheme, ya’ll! I wonder if they’ll be hard on the “beav” later.

Seems Mitch hates his new job, because “they do drug testing.” Dad thinks the new cowboy host is too good at his job and taking over. No, no, no, say it ain’t so. Not the cowboy! He agrees to hire Mitch back but only if he fires Wyatt. Well, crap, it’s only a guest shot for Parker Young. I’ll have to cyberstalk his IMDB to see where he’ll pop up again.

After Les Mis ends (like six hours later, I can say that, I’ve seen it), Eddie hits the john and Phillip ditches so he doesn’t have to go to the concert. Schemer just got played ya’ll! Eddie thinks he lost him and Mom panics. She just wants to tell the Goldsteins the truth and put all the blame on Eddie “because of legal purposes.” When they get to the house, Phillip answers the door and says Shabbat ended at sundown and he didn’t want to go to the concert so he took a bus home. Mom: “I thought it ended at midnight.” Phillip: “I’m a devout Jew, not Cinderella.” Okay, that was funny and that one good writer in the production room nailed it. Once Mom finds out it was Phillip who broke a promise to Eddie and just left him, she stands up for Eddie and declares that Phillip “is not a good Chinese boy.” Mom makes it up to Eddie by taking him to the Beastie Boys herself and Beav Eddie got what he wanted after all.

Next day Eddie wears his Beastie Boys shirt to school and low and behold the “black kid” also went! Now the black kid and the Asian kid can bond over rap music made by Jewish kids. I can hear them all rapping “It’s A Small World,” in the back of my mind.

For one brief shining (Parker Young) moment I was almost all in on this episode and show. Sadly, he’s gone and I’ll just have to content myself that it’s eight episodes down, five to go.