Fresh Off The Boat Recap, Episode 9

Fresh Off The Boat Recap, Episode 9: “License To Sell” 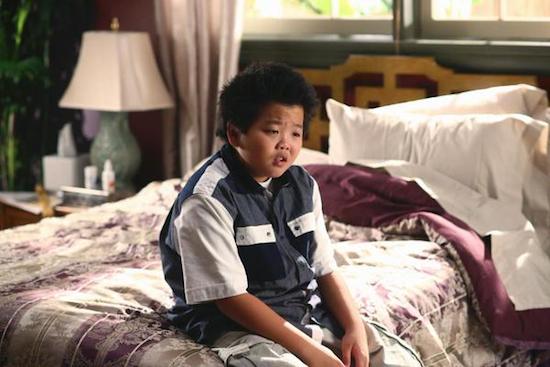 Mom is finally selling houses! Problem is she isn’t licensed. No big whoop for her, the test will be a breeze! Except she freaks when she meets Kim, a mega realtor who’s sold 358 houses and is getting recertified. She walks out of the test, assuaging her failure with a Chipwitch. Mmmm…now that’s something I can get behind: Chipwitch and a mostly Mom-centric episode.

Eddie asks his dad for love advice to woo Nicole. Sadly, he compares it to a restaurant and tells him that he needs to be conveniently located. Or at the very least, be everywhere she is. Really, that just sounds like stalking to me.

Of course, Dad gets his storyline too. He gets a seated salon-style hair dryer, because it’s better to blow the hair down. This leads to all sorts of shenanigans. Actually, it doesn’t. It just gives Dad, son #2 and son #3 something to do in this episode. And don’t even get me started on grandma — I thought she might have died but they rolled her out for one line and then rolled her off (must be some actor’s union thing). Go Grandma!

Eddie’s idea of getting close to Nicole means getting detention for saying “Oprah sucks” in class. (Dude, do you really gotta take Oprah down? That can be dangerous.) Things don’t turn out as well as expected so Dad suggests finding something in common, which turns out to be beauty school. Nicole thinks high school sucks and wants to be a beautician. Hmm, someone’s been watching Grease. I’m just waiting for Didi Conn to pop out and everyone break into “Beauty School Drop-Out.” Instead it leads to Eddie being Nicole’s test subject, getting an earring and henna tattoos.

And after all that, we get back to Mom. She doesn’t want to take the test because she will never be the best like Kim. Instead she falls into a Chipwitch spiral of junk food misery at the convenience store while “flies make love in the hot dog case.” Been there, girl! Fortunately, Dad’s around to save the day and explain that being a quitter is a worse example for the boys than not being “the best.” And that, folks, is tonight’s lesson! Thank you very much, see you next week, let’s all go home now. (It’s a lesson I’m taking to heart, by not quitting these episode recaps. Wow, maybe this show is teaching me something.)

Oh yeah, back to Eddie. That whole “shared interest” thing didn’t go over well with Mom and Dad, because it was just her interests. In the space of one minute they resolved that he should not give up on her but find shared interests because Mom’s not a quitter and neither is Eddie! It’s the whole lesson again, just in case you missed it from the first time around.

And just because sometimes Mom doesn’t necessarily get all the lines, here are the best ones not by her:
• “Look at Janet Jackson and Jermaine Dupre — if that ashy little nugget could get it, so could I.”
• “Don’t worry I know you photograph angry.”
• “You look like an Indian Elmer Fudd.”

Until next week, “tha-tha-that’s all folks!”