Gail Simmons On the Table (VIDEO)

WATCH: Gail Simmons Orders Eric Ripert Around The On The Table Kitchen And He Loves It 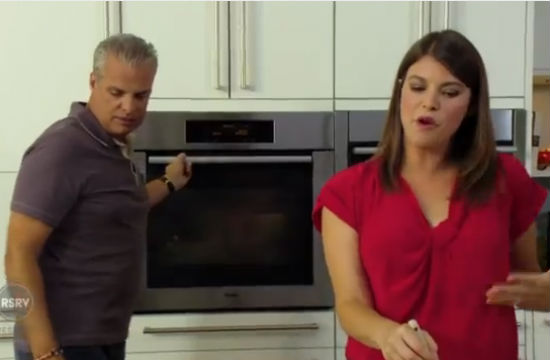 This month’s installment of Eric Ripert’s RESERVE Channel series On The Table featured guest Gail Simmons, who very strategically brought along a dish that Eric had never even heard of. She’s a crafty one, that Gail. After popping a bottle of champagne and whipping up a batch of Bloody Marias (a version of the brunch bev that swaps out the typical vodka for Eric’s preferred spirit: tequila), Gail set off to teach Eric how to prepare Welsh Rarebit.

Turns out Eric loves being bossed around a kitchen. Wait a minute, enjoying a submissive role in your personal life when you’re typically dominant in your professional one? That’s preposterous. (The man helms a restaurant with the longest-standing 4-star record in New York City. Turn your perfect-salmon-searing brain off for a while, Eric. We don’t blame you.)

While he’s initially baffled by the idea of putting beer in a roux (ie., the Frenchest thing he could possibly think), Eric cleans his whole plate and praises “the social siren of the food world” for her ability to command a sous chef. Sidenote: he does this really cute thing where he saves the yolk till the end, because the yolk is his favorite part, and we previously thought that was only a thing Former Fat Kids did as a dead giveaway, so props to Eric.

There’s also a segment where they talk about the over-familiarity people feel with reality TV stars. We have no idea what they’re talking about. It’s not like we grilled them on Hugh Acheson and Johnny Iuzzini’s personal grooming habits or anything when we visited the set during this episode and snagged an interview.

At least we’re not as bad as the fan Riper keeps running into who has his and Anthony Bourdain’s heads tattooed on his leg. Happy (Creepy) Halloween!

Check out the episode in its entirety below.