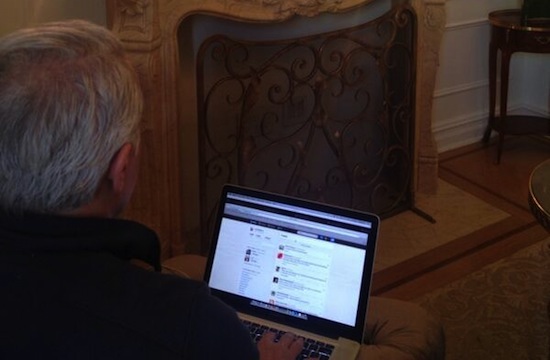 Well, that’s one way to drum up support (and views) for the fledgling Food Network, isn’t it?

But for real, we nominate Geoffrey Zakarian to be our social media director of life, just for being kind of amazing on the Food Network (and his own) Twitter during the premiere of The Kitchen. Because Zakarian is holed up in a Plaza suite (a good choice, on a freezing-as-balls day as it is in New York City), with a bottle of champagne, obviously having way more fun than any of us will ever be on a Saturday morning:

Sure, Zakarian was Tweeting out mostly cooking tips and rallying support for The Kitchen, but we do appreciate the few gem Tweets out there (that we’re hoping were fueled by massive amounts of champagne). Zakarian, we like your sense of humor.

@FoodNetwork @ThePlazaHotel @gzchef is that the host from the hunger games

[Editor’s note: Love that he’s basically spamming Jeff Mauro and the whole set at this point.)

New Ringtone: Butter Sizzling on a griddle. What does anyone else have crazy for their ringtone? #TheKitchen –@gzchef

And the winner for the best interaction EVER on Twitter …

Yes @eliasholtz, love them in cocktails. Gin Fizz in particular. @FoodNetwork …and no gadget needed. #TheKitchen