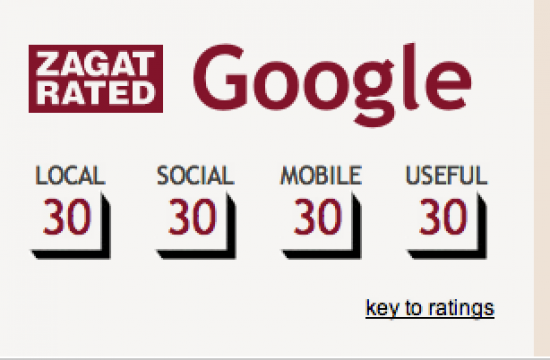 Today, Google finally unveiled the reason behind their recent acquisition of Zagat: the rating service’s reviews will now be free of charge, viewable in search results in Google Plus’s revamped Local search feature.

Though many observers have pointed out that this latest move is hardly the Yelp-killer that Google’s been looking for — and, more importantly, that Zagat’s information is woefully out of date — the move gives Google one clear advantage over Yelp that benefits restauranteurs and chefs the most: Zagat’s sterling reputation, built up over the past three decades.

While Yelp has an enormous following which allows for faster, crowdsourced reviews of new places, the anonymous posting system, shady sales practices, and obfuscatory policies surrounding what reviews end up on their site (and how truthful they are) has put chefs at the mercy of a faceless public with arbitrary standards for quality. For instance: in New York City, The Cinnamon Snail Truck is rated higher than Eleven Madison Park. That’s like comparing apples to Faberge apples.

Publicly, chefs profess a diplomatically strained relationship with Yelp. At a panel at last year’s South Beach Food and Wine Festival, prominent chefs such as Michelle Bernstein and Marc Murphy dinged the review site for allowing “crazies” to proliferate and possibly ruin restaurants. That, however, was tame, civilized discourse, compared to the rant published by chef Aimal Formoli of San Francisco on Facebook. When the Sacramento Bee caught up with him, he noted that his sentiments were shared by most chefs. “We all talk about it,” Formoli said. “Most of us don’t want to put a comment on there. Then you get trashed completely.”

Google’s been trying to move into the local online search space for years, a growing market worth nearly $140 billion per year, according to the New York Times. Their past attempt to copy Yelp’s model with Google Places Reviews resulted in not-so-hot results, and contributed to a Congressional antitrust investigation in which Yelp participated — maaaaaybe because Google bought Zagat around that time. With their purchase of Zagat, which pretty much everyone agrees is a “trustworthy and authorita[tive]” source that also has the benefit of being quantifiable, Google knocks out any concern that their ratings are based on anything overtly subjective.

However, this advantage only counts if Google actually uses Zagat to its full advantage. Not only is their information currently out of date, the time it takes for Zagat to update its rankings or review new places is laboriously slow compared to Yelp’s nearly-instantaneous rankings. If Google can leverage Zagat’s reputation in their search results and adapt it to Internet Time, it would benefit both chefs and customers with a much more accurate, standardized representation of the overall experience in these restaurants.

That is, if Google doesn’t screw it up like it has with some of their past projects. (At least Google bought this one — they do pretty well with their acquisitions, like YouTube and Android.)