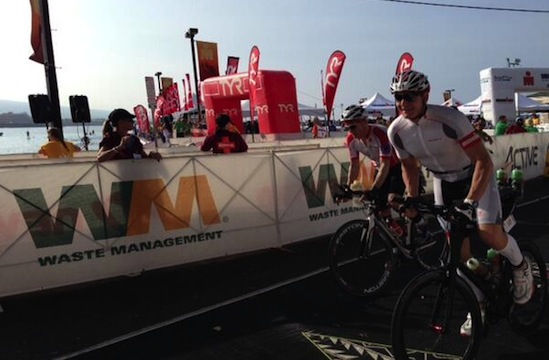 MasterChef judge and stud muffin (well, depending on who you ask) Gordon Ramsay finished the Hawaiian Ironman competition early this morning, in 14 hours, 4 minutes and 48 seconds. Not too shabby.

Apparently, Ramsay was awarded the “wild card” in the competition, having never qualified for an Ironman competition before. According to the Los Angeles Times, about 8,000 athletes compete in the Hawaiian Ironman, with many never crossing the finish line (competitors start at 7 a.m. and must cross the finish line at midnight in order to receive an official time). But Ramsay was evidently killin’ it all the way through; says the LA Times:

“Ramsay was never in any danger of missing the cutoff. He finished the swim in 1:20:21 and the bike ride in 6:35:54. But he was clearly suffering during the marathon. He started out with a pace of 9 minutes, 50 seconds per mile. But by about mile 19, he was clocked at 20:02 minutes per mile.

However, he picked up the pace and finished the marathon in just under six hours, giving him an overall finish time of 14:04:48, according to the race website’s athlete tracker.”

And obvi, Ramsay tweeted the way through the race.

Getting ready at the start @IronmanTri. One of 2100 in the race! #Kona2013 pic.twitter.com/htBUOYOXSy

Two down, one more leg to go. Now for the run ! #IMKONA http://t.co/XBZwpsn7Oy

What more than can we say than…. damn, good work.