Gordon Ramsay Feuding With… Everybody 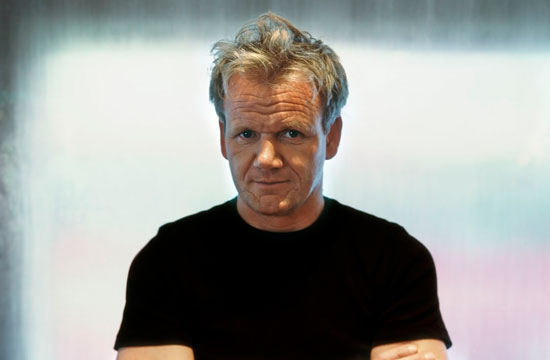 First of all, the Mens Journal profile of Gordon Ramsay‘s life and ambitions is emotionally draining. We mean sad. We mean “revelations about paternal issues” and “being let down by every significant male figure in one’s life” and “maybe these issues are why he has such a reputation for casual cruelty”…it’s that kind of sad.

But it also probably explains why he had the following things to say about his peers in the culinary world:

“I mean, I once asked Cat Cora from the Food Network to appear on ‘MasterChef,’ which sometimes pits amateur chefs against pros. They were to prepare a Cat Cora dish, and obviously she was never going to lose, but she and her agents insisted that, even if her dish wasn’t the best, she win. ‘Damage limitation: She needs to know she’s going to win.’ I said, ‘Look, there’s no fucking way I’m ever going to allow that. No way. Over my dead body.’ I was so pissed off.”

Though a representative for Cat Cora says the former Iron Chef “clearly isn’t afraid of competition. Simple as that,” Ramsay isn’t done with the Iron Chefs at all:

I can still look at a box of raw ingredients and put together the best fucking dish you’ll ever eat. That’s why I laugh when they say, ‘Let’s see if he’s a real chef. Let’s get him up against Bobby Flay on ‘Iron Chef.” I’m like, ‘Fucking do me a favor…come on. I’ve forgotten more than he’s known!'”

Were you aware that Ramsay also holds grudges against people like food critics?

“Frank Bruni [who reviewed my first U.S. restaurant] fucked me sideways, but the fascinating thing about that, I knew he had the hots for my French maître d’. But I mean, what’s Frank Bruni doing now? Tweeting about the government? I piss myself. I wish him the very best.”

And, by the way, that one time he blamed a reservation book theft on Marco Pierre White and later admitted that he’d done it?

“I didn’t blame the missing reservations book on somebody else. It was suggested…Well, OK, I blamed the guy who was about to screw me and get my job” – which the guy in question, Pierre White, has steadfastly denied all these years – “and so if it took an ounce of pressure off of that, it was worth it.” He slaps himself back in his seat, happy with his explanation, while all you can do is look at him, mouth agape, slightly envious of how unruffled he is by any of this, how cheerfully certain he is that what he did was right.

If there’s one thing that might make up for the Sad Parade featuring the Anger Issues Marching Band, it might be the strategy he used to woo his now-wife, Tana:

“I took her for a long motorcycle ride, then out to lunch, and then I said, ‘Can I cook for you tonight?’ She was my mate’s girlfriend” – he claims she was his mate’s ex-girlfriend, though many reports suggest they were still together – “and she was gorgeous, and I knew I could cook better than him. I put together the most amazing langoustine salad, and I made this amazing fragrant lemongrass mayonnaise to put over the prawns, these beautiful, thick, number one langoustines, which were poached in bouillon and served over a nice fresh green-bean salad with slightly toasted hazelnuts, and it was fucking amazing. And it worked massively. By the time we got halfway through the appetizer, her clothes were off, we didn’t even get to the main course. What a night.”