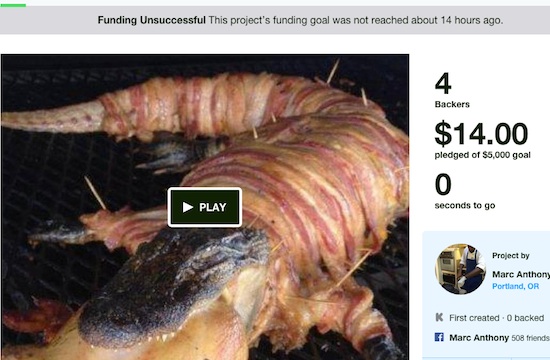 Yet that’s what one chef in Portland, Ore., thought to do for his own Friendsgiving.

In 2013, Portland Oregon was the most moved to city in America. Not I, but many of us will be spending our first thanksgiving away from our families. I want to do something memorable for those of us who won’t be going home for the holidays. I’m calling it Orphan Thanksgiving. It will be a party.

And he started a Kickstarter for it. And even Sam Sifton was like WHATTTTTTT.

Sorry dude, but a bacon-wrapped gator-pig-turducken-whatever just isn’t what people want to eat on Thanksgiving. Or ever. (At least potato salad is like, delicious.) Just because you’re inspired by the folks at Epic Meal Time means that it should be done.

Just when we thought we had seen every Thanksgiving food mash-up like, ever, we were so wrong.