Harold Dieterle On His New Book, Tasting Menus, And Why He Makes The Best Thai In NYC 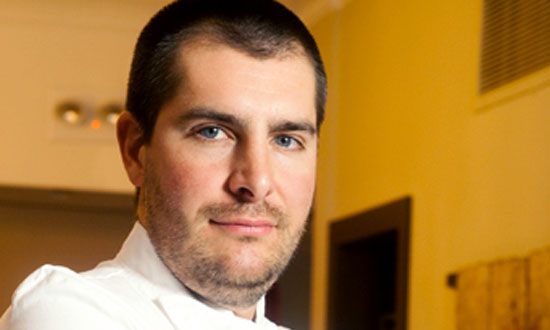 By virtue of being first, Harold Dieterle may be one of Top Chef’s most famous alums. But he’s also one of its most successful. With two restaurants in New York City, a cookbook on the way, and no shortage of people clamoring for the duck tamales he served up at the Food & Wine Classic in Aspen this past weekend, Harold Dieterle still found the time to sit down with us and talk “blown-out” talk tasting menus, his plans for a new show, and why young chefs who go on television make him really, really angry.

So as a chef, what do you think are the biggest benefits to attending the Food & Wine Classic?

It’s nice to get out of NYC, for sure. It’s nice to be able to promote the restaurant and from a PR stand point, these things help keep your restaurants relevant. And it’s also, for me, I met my wife six years ago at the Classic. So it’s sort of our pre-anniversary anniversary. It’s our anniversary but I make it clear that she only gets one anniversary gift. [Laughs].

Is it all work? What are the fun parts of being here?

No no, it’s not all work. On Thursday nights, after the welcome reception, there’s a Magnum party that I don’t get invited to, but I crash every year. And it’s just, like, it’s one of those things where a lot of wineries drop magnums on the tables and say, ‘Help yourself!’ It’s very generous.

Your name came up in my interview with Bourdain — and in a few others — as an example of someone who had done [reality tv] right. That you put your head down and worked and were committed to your kitchen.

I’ve said this in a few interviews, but I almost feel like, after you do Top Chef, that there should be some sort of mentorship program. Because you do this show and you think you’re just going to rule the world. And you’re never going to have to work again. And the thing that really pisses me off, as a chef, is like, is our profession that bad? That the second you get on TV, as a chef, you decide to stop cooking. It’s like, ‘What about what we do is so bad?’ It makes me personally angry. That’s the one aspect of it that makes me really angry, is the contestants that get into their head — and I don’t know where they get the idea, but —

It’s that they do TV to get out of the kitchen. It should be their dream job! Like, you’ve just been given the opportunity to do what you love.

Yes! Is what we do as a chef that shitty? That you don’t want to do it anymore? Like for me, I still get fired up going into the kitchen every day. I’m a bit an adrenaline junkie, so that’s part of it, and it feeds it for me. But I love it.

How do you split your time between your kitchens?

Would you ever do another food TV show?

I would. I wouldn’t mind getting back on TV. I’ve had some situations that have kind of progressed and then not. And for me right now, it’s a combination of things. I’ve pitched some interesting food ideas to networks and then they’ve paired me with production companies that couldn’t be further from my style whatsoever. Just like, really bad.

What style would you want? In a perfect world, what would it be like?

I mean, something that’s just going to let me be me. I’m snarky and sarcastic and I don’t really play the ham role too much. I had a show on hold with Bravo that I thought was going to be good and cool. And they put me with a production company that didn’t really see eye to eye and the show just evolved in a way that it wasn’t really going anywhere.

It’s interesting that you say you’d want the show to let you be you. I interviewed Andrew Zimmern earlier, and he said the same thing — that he, along with Bourdain, is one of the luckiest guys on TV right now because they are allowed to be themselves.

The thing about those two guys, too, is that I idolize them to the point where — especially Anthony — the stuff that comes out of his mouth is just fucking unbelievable. It’s like, I don’t have that vocabulary.

Also, he speaks in complete paragraphs.

I know, I know. The stuff that comes out of his mouth is just, ‘How did you do that?’ So I have, I guess, a man crush on him. But he’s a bit of an idol, from that perspective. Like, how is he able to articulate everything so seamlessly? It’s amazing.

One of the other conversations I had with him recently was about Francis Lam’s article in the New York Times. What’s your take on the idea of taking inspiration from other cultures?

I think it’s different for everybody. For me, I’m not trying to do authentic food. When I opened Perilla, I wanted it to not be a Top Chef restaurant, but I wasn’t able to control that. People are going to write what they want to write. I was able to do a better job of that with Kin Shop but it was very important to me to make it clear that I’m not trying to do authentic food. I’m doing my interpretation of Thai food. And I think that got across and I think that’s one of the main reasons it’s been successful. If people think something is good, it’s good.

And if people want to talk about being authentic, I don’t know really know anything about that. I know about the flavors and I know how achieve those flavors and I think I do probably a better job than most Thai restaurants in New York that think they’re authentic — but I’m not trying to do that. The way I do things is for a reason. Like one of the things is that in a lot of Thai food, particularly braises and curries, it’s a one pot dish. You make the curry and then the protein is cooking in it and I don’t really agree with that because I feel like everything just gets muddled and washed. I think curries are amazing and I like to focus on making that sauce, and then cook my protein separately and let it do it’s own thing and then bring it all together. I feel like the contrast makes everything pop.

What made you look to Asia?

You know, it’s weird. I went in 2003, when I was working at The Harrison as a sous chef, and kind of just traveled abroad on my own and really just fell in love with the food and the culture, but hadn’t really been taken on a proper tour and felt like there was a lot of holes in my trip. But it was one of the first vacations I’d taken in about five years. And I’d saved a decent amount of money and really treated myself. And then in 2007, I did some press dinners in Indonesia and in Thailand and the flip side of that was that I had someone who sets up, kinda like chef trips and he’s done trips with Michelle Bernstein [and] Thomas Keller. Basically, you do some press dinners and then he takes you around and shows you Thailand, which was incredible. It was a little bit after the recession kinda hit in late 2007, early 2008, and we were about to start raising money to do a wine bar and sandwich shop and I came back and was like, ‘I wanna open a Thai restaurant. This is what I’m doing. This is what I’m passionate about.’ That trip was so inspirational.

>>>>NEXT: Harold spills the beans on his first book, his plans for mastering NYC’s Italian food scene, and why he’s totally “over” tasting menus.