Dream Jobs That Exist in Food TV: Head of Potatoes 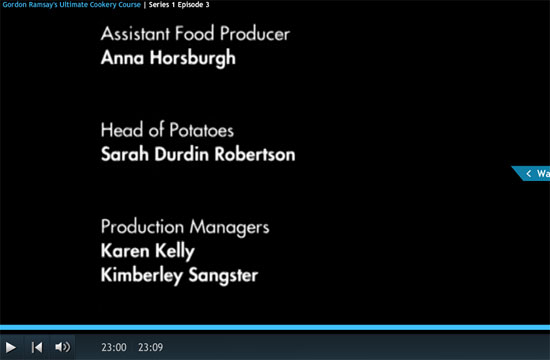 The job of his (and our) dreams? “Head of Potatoes.”

So we did a little Googling. Sorry, Internet, but the position of Head of Potatoes involves a lot of non-potato work.

In an interview with The Knowledge, Robertson described her job as being similar to an executive producer, except more “hands-on” and more food-oriented:

Straight’ historical docs, magazine shows, ob docs, entertainment or factual programmes are a challenge as they require a lot of hard work to produce. To make food-related versions of these types of shows just makes it even more complicated. Food adds another dimension to a production so you have to go the extra mile and it’s impossible to do that without the right team.

Do you want to become a Head of Potatoes, too? You can either follow Robertson’s advice, which requires “a love of food with good kitchen skills (a cookery course or two would serve you well),” or chop your body up into inch-thick pieces and bury yourself in well-drained, loose soil, then harvest in 10 weeks. Boom. Dream job.