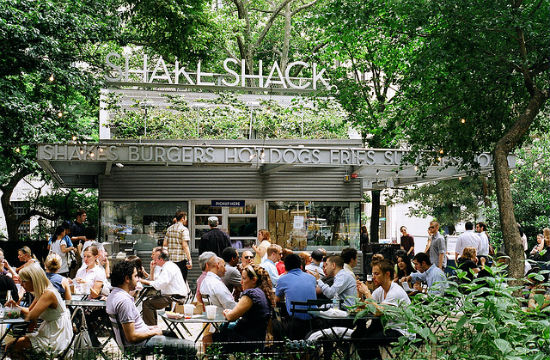 Congratulations, world, you did it — you got Shake Shack to make an IPO, or go public. And it’s a joyous thing! We learn adorable things like how Shake Shack was almost called “Custard’s First Stand,” and that Shake Shack-ers talk about “Shack-onomics” when discussing financials, and that people like burgers in the summer, and OMG Shake Shack was like, totally on Newsroom! Lovely. We too are excited for concretes and shack burgers to take over the world. And then, we get cynical and find the one bad thing that no one wants to say about Shake Shack ever. So we’ll just go ahead and say it anyways!

For what it’s worth, we know that Shake Shack is a good employer. And we like that. Unlike horrible fast-food chains like Subway, Shake Shack goes out of its way to treat, and pay, its employees fairly. The fact that Danny Meyer et al. pays above minimum wage is like, a big deal — and it’s not just to make its workers happy. AND THEN, we find little tidbits like this sprinkled throughout the IPO filing (as quoted by the Wall Street Journal, emphasis ours):

For instance, in Manhattan Shacks, we start our new employees at $10.00 per hour even though the minimum wage in New York is $8.00 per hour. We believe that this enables us to attract a higher caliber employee and this translates directly to better guest service. Our desire is to continue to do so and, as such, there can be no assurance that we will generate same Shack sales growth in an amount sufficient to offset increases in minimum wage or other inflationary pressures.

Let’s unpack that, shall we?

Shake Shack is admitting that paying a higher-than-average minimum wage, and those other pesky problems like healthcare, could adversely affect the chain’s success. In fact, such factors are listed in Shake Shack’s “risk factors” section. From the filing:

With the passage in 2010 of the U.S. Patient Protection and Affordable Care Act (the “ACA”), we are required to provide affordable coverage, as defined in the ACA, to all employees, or otherwise be subject to a payment per employee based on the affordability criteria in the ACA. Many of these requirements will be phased in over a period of time, with the majority of the most impactful provisions affecting us presently anticipated to begin in the second quarter of fiscal 2015. Additionally, some states and localities have passed state and local laws mandating the provision of certain levels of health benefits by some employers. Increased health care and insurance costs could have a material adverse effect on our business, financial condition and results of operations. In addition, changes in federal or state workplace regulations could adversely affect our ability to meet our financial targets.

Various federal and state labor laws govern our relationships with our employees and affect operating costs. These laws include employee classifications as exempt or non-exempt, minimum wage requirements, unemployment tax rates, workers’ compensation rates, overtime, family leave, safety standards, payroll taxes, citizenship requirements and other wage and benefit requirements for employees classified as non-exempt. As our team members are paid at rates set above, but related to, the applicable minimum wage, further increases in the minimum wage could increase our labor costs. Significant additional government regulations could materially affect our business, financial condition and results of operations.

So sure, Shake Shack is going to keep doing what it does and make sure that it’s a far better-than-average food employer. But what will happen when Shake Shack does actually go public? What will happen when Shake Shack has investors to answer to? It won’t just be the quality of food that’s at stake (as Consumerist hilariously points out), it’ll be the quality of life at Shake Shack. Meyer, by all means, has proven that he won’t cave to the pressures of a slowing economy and a dying industry that thinks it can still pay its workers sh*t and have them lovin’ it. But will a public filing shake the core of Shake Shack’s being? And what if things like a higher minimum wage by federal law does go into effect? We can’t be the only ones wondering this, right?

Not to make us one of those pesky bloggers to damage Shake Shack’s reputation, as also mentioned in Shake Shack’s risk factors in the filing. But it’s our hope and prayer than when SHAK lights up on Wall Street, those first to invest line up with Meyer’s original intention of paying and treating its workers well. That includes those annoying little things like full health benefits and a living wage. We know, so ridic.