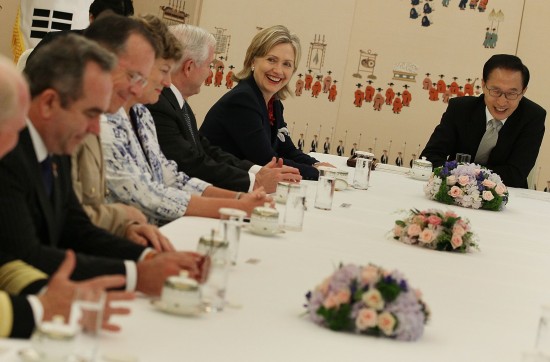 Though the concept only sprung into existence by the end of the Cold War, soft power — a diplomatic strategy based on a country’s attractive, cool assets, like pop culture and international aid and patriotic idealism — is a subtle, sexy way of asserting American supremacy. And boy does Secretary of State Hillary Clinton love using soft power whenever the situation calls for it, like, say, retooling the State Department’s catering services to serve delicious food from celebrity chefs whenever she hosts visiting heads of state. And no, spectacular food is not a froofy detail, according to deputy chief of protocol Natalie Jones:  “Tough negotiations take place at the dining table.”

Today’s New York Times covered the gastronomical changes occurring in the State Department, from the decision to keep the catering services in-house, to the menus’ new emphases on local, organic and seasonal products, and the result has been quite tasty and effective, to everyone’s shock (on a recent visit, Benjamin Netanyahu was stunned that he’d been served “good food” by the Department.) And when even the State Department’s kitchens are too “pedestrian” for a major guest, such as a visiting head of state, Hillz calls on talented celebrity chefs to cook.

For instance, Clinton invited April Bloomfield to serve lunch for British Prime Minister David Cameron and his wife Samantha during their visit in March, particularly since Bloomfield, a super Brit, cooks with plenty of American influences. “We don’t want to serve them their food,” says Clinton’s chief of protocol Capricia Marshall, “because they can do it better. But we want to give a nod to their culture in a fusion dish.”

So that explains why Bryan Voltaggio made “peekytoe crab with jasmine rice, yuzu, avocado and soy air” for Japanese prime minister Yoshihiko Noda! And that also explains why she tapped Ming Tsai to cook for the diplomatically-iffy Chinese, serving a “soy-marinated black cod and eight treasured rice packet with dried fruit and pork sausage” for Vice President Xi Jinping, which, apparently, turned out to be a smart move: “When Mr. Xi met the chef, ‘his eyes lit up,’ Ms. Marshall said. ‘They spoke Chinese, and according to the translator, he said, ‘Isn’t this wonderful.’’ ”