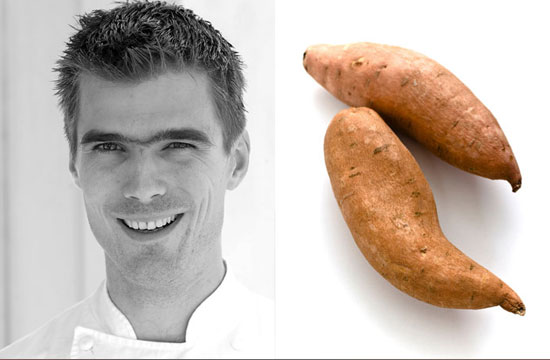 Did you know that the humble sweet potato is an extremely important crop in many areas of the world? It is high in nutrients like beta-carotene, Vitamin A, antioxidants, anti-inflammatory compounds, anthocyanins, and Hugh Acheson endorsements. (Hugh Acheson is a vital part of a balanced diet.)

In promoting the sweet potato, Acheson joins a bunch of other celebrity chefs like Mario Batali, Spike Mendelsohn, Sam Talbot, and that other guy for World Food Day. The October 16th celebration hopes to bring public awareness to malnutrition, poverty, and the global hunger crisis.

As well as raising funds and awareness, Acheson plans to feature the sweet potato as the star ingredient at an Atlanta event. “I had no idea that it could pack suck nutritional punch and be such a gamechanger,” Acheson says of the humble sweet potato, which is often deep-fried in America, but relied upon as a key staple food in places like sub-Saharan Africa. “We need more crops like this to become staples for locally feeding the world.”

He would also like American kids to realize that sweet potatoes aren’t only made for pies: “I think the first step is food awareness at a young age,” Acheson says. “If you don’t teach kids about vegetables early, then they get reliant on french fries and ketchup being their vegetables.”

So Acheson! How you like them humble sweet potatoes? “Roast them in slices and then toss them with a simple vinaigrette, raisins, figs and arugula,” he suggests. “Or make a soup out them with chilies and roasted onions.”