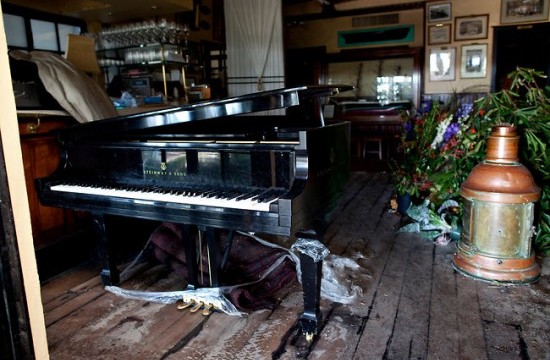 Though restaurants throughout New York were devastated by Hurricane Sandy, few saw complete destruction like the River Cafe, a 35-year-old fine dining mainstay situated on a barge in the East River near Brooklyn, and responsible for starting the career of Charlie Palmer. As part of his series highlighting the plight of restaurants in the City, the New York Times’ Pete Wells visited the remains of the River Cafe — but found that there is unlikely to be a River Cafe to go back to for a long time:

On the night of the storm, two workers stood guard until it was no longer safe to do so, at which point they opened the doors of the main dining room so the water would merely rip through rather than accumulate. Still, the flooding reached several feet; the restaurant’s red banquettes were ripped from the wall. Refrigerators toppled; salt water corroded electrical wiring. A new Steinway piano was destroyed; Georgian antiques were damaged.

Walls remain, but the presence of mold means they need to be taken down and reconstructed. The restaurant’s closing — there is no date yet for reopening — puts more than 100 people out of regular work in an already exhausting job market. And then there is the funereal matter of inventory. By Monday, three cargo vans of caviar, lobster, beef, veal, duck, foie gras and other perishables costing vast amounts of money had been filled; their contents would be thrown out. That afternoon, the pastry chef loaded trash bags with dozens of perfectly formed tart shells, ice cream, rolls, flat breads and lemons.

The most crippling loss? Thousands of bottles of wine, destroyed by water seeping into the corks and washing off labels. “The restaurant carries wines that cost thousands of dollars a bottle, nearly all of them bought by [sommelier Joe] DeLissio not at auction but from the makers. ‘This is heartbreaking for me,’ he said.”

As of now, the restaurant is closed indefinitely, but Wells captures how much the loss has hurt not only the 100 people employed by the River Cafe, but also the patrons who loyally dined there for three decades.