Introducing Kitchensurfing, A Website Where People Rent Chefs By The Night 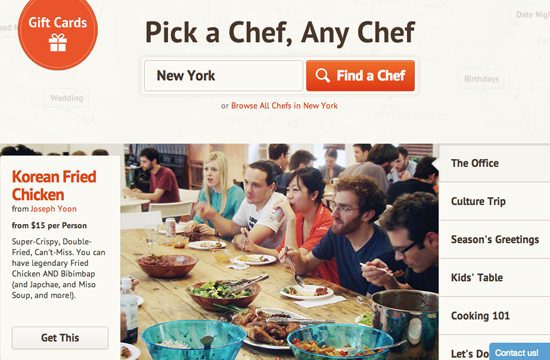 Much like the lifestyle-specific apps AirBnB, Zipcar and Uber, Kitchensurfing serves as an online middleman between chefs and people who want professionally cooked meals. Since the company sits nicely at the intersection of technology and food, two things that the New York Times can’t get enough of, it received a profile in the Gray Lady’s Sunday Section yesterday.

Ironically enough, the founder of Kitchensurfing, Chris Muscarella, 30, created the company after he burned out in a professional kitchen. A former software engineer who built another startup (as well as studied Ancient Martial Arts in China because of course), Muscarella thought he’d he was done with the tech scene by 29 and, like many before him, opened a restaurant, thinking he’d find satisfaction on a kitchen line. And like many before him, he didn’t:

He was startled by what he saw of the grind of kitchen life and the low compensation of cooks. “I feel confident enough saying this,” he said. “You’re probably statistically more likely to make it to the N.B.A. than you are to be a chef that makes $100,000 a year or more.”

Kitchensurfing soon sprang from the realization that a) private chefs can make much more money than restaurant chefs, if they have the clientele, and b) there was no website connecting chefs with clients. As the site started up, though, they had to recruit chefs — both pro and amateur — through less spectacular forms of job listing. (For instance, a sign in Queens that asks “Do you like to Cook Tibetan & Nepali Food, Use the Internet, & Enjoy Making $$$?” would probably send us running in the other direction; but it worked.)

The fun part: any chef who wants to be listed on the site must “audition” for the Kitchensurfing team (in other words, cook dinner for seven), as well as both shop and clean up after themselves while on the job.