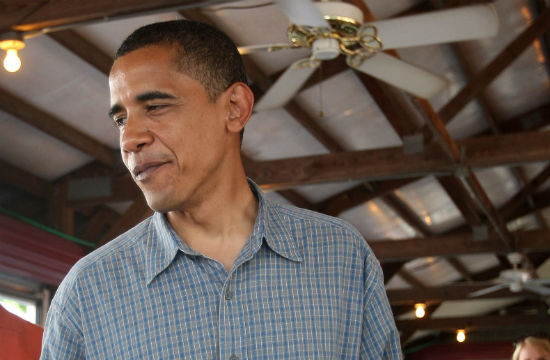 Remember how Barack Obama visited the Iowa State Fair yesterday? And ate porkchops, and drank a beer, and bought some beers for some other dudes, and “aw shucks”-ed about Michelle banning him from eating deep-fried twinkies? Wasn’t that nice of him? Wasn’t that a nice little trip, hob-nobbin’ with the Iowans, and buying alcoholic beverages for strangers?

No. It was rude and greedy and selfish and completely insensitive to the needs of the people! It screwed up business owners forever. Or so said the guy who owned the beer tent. And Senator Chuck Grassley. You may remember Chuck Grassley from such stories as the time he tweeted that he’d be eating double portions of meat on Meatless Mondays to protest the “stupid USDA recommendation” for reducing our meat intake. Yeah. That guy.

Senator Grassley tweeted the morning after Obama’s visit, “How does PresO justify havin secret service shut down the bud tent @ the state fair nd the owner told me he loses 50,000 n 1 nite.”

First of all, what beer tent owner Mike Cunningham said was that he estimated a loss of $25,000. So let’s take a breather, Grassley. Especially with all that artery-clogging bacon you’re now consuming in double portions.

What actually happened was that the Secret Service shut down the tent and screened patrons who wished to be present when Obama stopped by. You know, the Secret Service’s job. Unfortunately, the whole shebang took two hours to orchestrate — two peak beer-buying hours when a popular cover band was about to take the stage right next door. Cunningham said he felt like The President’s visit “put a damper on what I’m trying to do here” because he had to shut down his operation during valuable drinking time.

But it’s not like he was pouring drafts for free when Obama finally did show up. He paid for his beers like all the other customers, and even paid for the ten rounds he bought for onlookers. In cash!

Obama’s camp reached out to Cunningham for a public response to Grassley’s tweet, but he hasn’t gotten back to them.

“I wouldn’t have voted for (Obama) before,” Cunningham told the DesMoines Register. “I won’t again.”

We said it yesterday, and we’ll say it again today: You know who would have been bad for beer sales? Mormons.