Is It Constitutional to Refuse to Serve Cake to Gays? A Primer 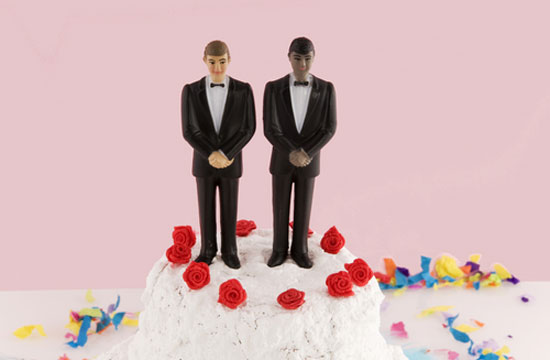 This week, Gay Cake Civil Rights made the news again when a judge ruled that it was illegal for Jack Phillips, the owner of Masterpiece Cake Shop in Denver, CO, to refuse service to a gay couple looking for a wedding cake. In an interview with Fox News’s Elizabeth Hasselbeck, Philips and his lawyer said that his refusal was well within his rights, stating the following:

Phillips’ attorney, Nicole Martin, told Hasselbeck that Phillips is protected under the First Amendment. “If the government can force you to violate your belief under the threat of a jail sentence, there is really no freedom they can’t take away, Elisabeth,” Martin said.

When asked if he would be prepared to go to jail in order to protest the order to make a cake for a gay couple, Phillips replied that he would, “if that’s what it takes.” The cake shop owner added that his rights would be infringed if he was forced to “participate” in a same-sex wedding.

This case, along with other gay cake scandals throughout the country, begs the question: is gay cake the segregated busing of our time? And more importantly, is refusing to sell cake to a gay couple unconstitutional?

Obviously It Violates The Law: That is, according to current Colorado state law. It’s not ambiguous at all — refusing service to people based on their sexual orientation (among other things) is explicitly illegal. So, uh, technically that judge was right.

But What If Being Forced to Make Gay Cake Violates the Constitution? Phillips’s lawyer implied that she would continue to challenge the judge’s ruling based on the First Amendment, which, if you ever went to grade school, protects the right to freedom of speech and freedom of religious exercise. We certainly can’t speak for the Supreme Court, should the Gay Cake Cases ever make their way up to that level in the appeals process (OH BOY WE HOPE IT DOES), but here’s how the judge who ruled in this case interpreted America’s Greatest Document: the Constitution is not cool with people who refuse to make gay wedding cake, on two levels.

Freedom of Speech: Phillips’s first argument claimed that being “forced” — or, being legally punished for refusing to make a cake for a gay wedding — was a violation of his freedom of speech, because making a cake could imply that he supported the concept of gay marriage. This presupposes that cake-making is a form of political expression, much like singing a song, giving a speech, or saluting a flag.

But could a beautifully-made cake change the world, much less support gay marriage? According to the judge’s ruling, a cake, no matter how pretty, does not in its cakey self count as a protected form of “expression”:

There is no doubt that decorating a wedding cake involves considerable skill and artistry. However, the finished product does not necessarily qualify as “speech,” as would saluting a flag, marching in a parade, or displaying a motto. …The undisputed evidence is that Phillips categorically refused to prepare a cake for Complainants’ same-sex wedding before there was any discussion about what that cake would look like. Phillips was not asked to apply any message or symbol to the cake, or to construct the cake in any fashion that could be reasonably understood as advocating same-sex marriage. After being refused, Complainants immediately left the shop. For all Phillips knew at the time, Complainants might have wanted a nondescript cake that would have been suitable for consumption at any wedding.

In short, the baker would have been well within his right to refuse serving them if the gay couple had walked into the bakery and demanded a cake covered in rainbows, S&M gear, Edith Windsor photos, and a icing-piped message that said “GAY MARRIAGE IS THE BEST AND JACK PHILLIPS SHOULD HAVE A DICK IN HIS MOUTH.” However, a plain old cake, with no messages inherent in its decoration, is just that: a cake.

Freedom of Religion: It’s indisputable that Phillips is free to believe whatever the heck he wants, such as “gays should not marry” and “I think my cake can talk”. However, according to case law, the freedom to believe whatever someone wants is vastly different from the freedom to conduct one’s self in accordance with their religious beliefs — especially if it infringes upon other people’s rights, or goes against the government’s interests to promote health, safety, and the general welfare. (That’s why, for instance, you can’t have twenty wives in America, even if your religion dictates that having twenty wives is totally cool; or, in the instance of Braunfeld v. Brown, you have to pay taxes, even if you’re Amish and you don’t believe in taxes.)

By refusing to make a cake for a gay wedding, Phillips may have thought that he was freely exercising his religion, but he laws of the state of Colorado and the great American land calls that “discrimination,” and that’s super duper not okay according to the Constitution:

Respondents’ refusal to provide a cake for Complainants’ same-sex wedding is distinctly the type of conduct that the Supreme Court has repeatedly found subject to legitimate regulation. Such discrimination is against the law (§ 24-34-601. C.R.S.); it adversely affects the rights of Complainants to be free from discrimination in the marketplace; and the impact upon Respondents is incidental to the state’s legitimate regulation of commercial activity. Respondents therefore have no valid claim that barring them from discriminating against same-sex customers violates their right to free exercise of religion. Conceptually, Respondents’ refusal to serve a same-sex couple due to religious objection to same-sex weddings is no different from refusing to serve a biracial couple because of religious objection to biracial marriage. However,that argument was struck down long ago in Bob Jones Univ. v. United States, supra.

BUT WHAT ABOUT THE OTHER PARTS OF THE CONSTITUTION? THERE ARE SO MANY AMENDMENTS IN THE CONSTITUTION. That is true! There are all sorts of other things in the Constitution that could have been addressed in the ruling (freedom of association, the Fifth and Fourteenth Amendments, etc), but since the lawyers for Phillips didn’t bring them up in their defense, the judge doesn’t have to address their applicability! That’s a wonderful/hair-rendering thing about the law: if you leave anything out, they won’t even bring it up!