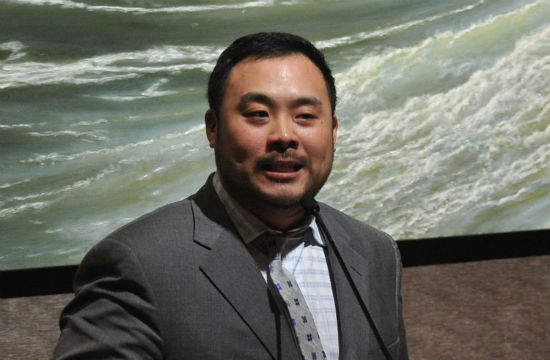 New rule: every time someone has more than two major media profiles on the same day, we officially rename the day after them. A few days ago, we celebrated Padma Lakshmi Day by watching her eat in New Orleans, sunbathe in the Hamptons, and upvote submissions on Reddit. Today, we celebrate David Chang Day by pointing out his two major profiles in two major publications.

First, Chang and the Momofuku Research Lab make an appearance at Buzzfeed, explaining why they’re attempting to coax complex umami flavors out of foods, but refuse to take the easy route and use MSG — the mass-produced version of the same, naturally-occurring chemical that appears in their food:

The chemical, glutamic acid, is the same, whether it is created by fermentation in a factory or in the R&D lab of Momofuku. The question for Chang comes down to why the stuff called MSG is demonized, and the “natural” evaporated kombu salt is considered gourmet.

“The funny thing is that I can make some stupid fucking hipster dish with Dorito powder and serve it on roasted corn with fucking lime juice and people would eat the shit out of it,” Chang says. “If I say, ‘That’s got MSG in it,’ no one’s going to say, ‘Well, that sounds delicious.’ But if I put Doritos on it…for fuck’s sake, Taco Bell’s marketing it directly.”

Next, Chang appears in Vogue (yes, that Vogue), in a profile blurbed by Eater, because the internet never likes sharing all its toys at once. Among other things, he reveals that he just broke off his engagement, he’s massively overworked, and Christina Tosi knows about some sort of Faustian deal, as she says below:

“‘I remember telling him that he’d obviously sold his soul, and someday the Devil would come to collect.’ On mornings when some Momofuku crisis is brewing, she will still send him a text that says simply, ‘Is today the day?'”