Jamie Bissonnette: French Chefs Told Me That I ‘Would Never Amount To Anything’ If I Stayed Vegan 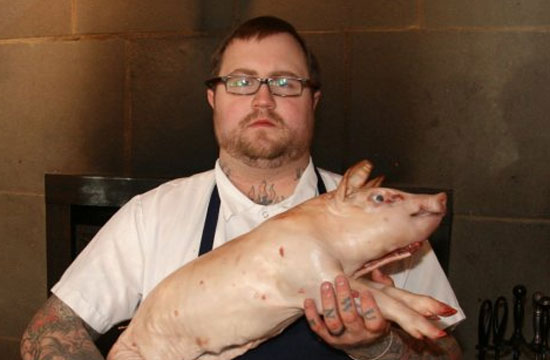 Jamie Bissonnette, chef at Toro and Coppa, has done a wonderful favor to the city of Boston by introducing unusual cuts of meat — heck, unusual meats — to their tables. (Seriously, it’s a huge favor.) So when he took a Boston Phoenix writer to Hong Kong on a massive eating tour of snake wine and barbecued tripe, the intvitable question emerged: how did Bissonette, a former vegan from boring old Canton, CT, become the city’s most innovative chef?

Well, a lot of things happened (stints as a straight-edge punk rocker, culinary school, MMA fighting, etc), but one of the key elements of his identity: he was, for a while, a Hare Krishna-visiting vegan. But for the sake of haute cuisine, he couldn’t continue to be one:

As a result of his hardcore-kid, straight-edge background, Jamie was off-and-on vegan until he was 22. That came to an end while he was working at [legendary three-star Michelin restaurant] L’Arpège in Paris, where he was told he would be fired (and that he would never amount to anything) if he didn’t taste everything. His love affair with foie gras blossomed shortly thereafter, he tells us, as our sixth course, foie “mui choy” (preserved mustard greens) with mui choy ice cream and crispy mui choy leaf, lands in front of us. His passion for all things offal is not entirely divorced from his vegan sensibilities: if you’re going to eat the animal, you respect it and waste nothing.

That’s right, vegans, the French fart in your general direction when it comes to your diet choices. Guess who has a James Beard nomination and a People’s Choice Award from Food and Wine Magazine? Bissonnette does, and he just drank snake wine, which is wine with snakes carcasses in it. How does that make you feel?