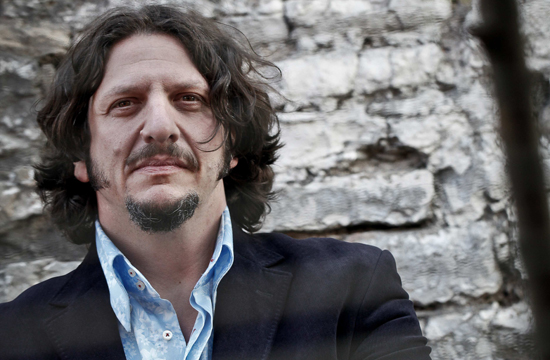 London Observer restaurant critic Jay Rayner is in New York City this week to promote his new eBook, My Dining Hell: Twenty Ways to Have a Lousy Night Out, which compiles the best of the worst-reviewed restaurants Rayner has destroyed (with words) over the course of his reviewing career. Reading his takedowns of everything from pretentious fusionists to Anti-Semitic restaurants, one thing became clear to me: Rayner has opinions and he will speak at length about them.

I was fortunate enough to get a lot of those opinions in a sprawling, two-part interview with him (the second half will go up tomorrow), even though he dinged me for using a recorder. “I’ve always been a bit suspicious of the recording of interviews,” he said at one point. “It works under the assumption that the interview is a conversation, and that you want the person that you’re interviewing to relax, but it’s not a conversation. You’re trying to elicit information in a short period of time. There’s nothing you can do to mediate that artificialness. Although, I’m not setting a good example because I’m used to the process. Anyway, let’s get on with the interview or you’ll have a huge bloody transcript.”

The Braiser: I read through [your book]…but there’s one thing that really did jump out at me at the very beginning. You’ve been doing this for over 20 years.

Jay Rayner: Yeah, I probably have. I would say 25 years.

And you’ve been a restaurant critic for a substantial portion of that time.

And in this line of work, you probably make a fair amount of enemies. How could you only pick four abusive blurbs for the purposes of this book?

Those are just excerpts from reviews of books of mine and it’s a nice gag and I think it’s a necessary one, but you don’t want to labor it. There’s more than that [that’s] abusive out there. It’s all down to the editing, isn’t it? If you want to, you can go on Twitter and search under my name and find people being abusive about me, if you feel there’s not quite enough abuse that’s on those pages. There’s more than enough out there.

With Twitter, is it all just “OMG, Jay Rayner Sux”?

No, there was one today, with some poor producer who was just accusing me of being some publicity seeking, valueless, immoral whore. Well, you know, fine. In the world of social media they can say all of this.

Generally, I think the point of your book is that people like it when you’re abusive.

I would say they like negative restaurant reviews. Abusive is a different word, but negative -– they like descriptions of negative experiences. It’s kind of what I call “vicarious displeasure”.

True. What’s more fun to write about in these types of reviews, the atmosphere or the food?

I would say, if you were to ask me, “Is it fun to write a list of descriptions?” — no, not really. No, I’ve probably reviewed nearly 800 restaurants over the years and “the lamb was overdone, the fish is raw” does get a bit monotonous and you have to find a way to express your responses to food. That’s kind of complicated. But that’s not the job. The job is a writing job, not an eating job, and it’s about finding a way to interest and excite people in the restaurant experience you have, whether that be negative or positive.

I noticed this one trend in a couple of the reviews that made it into the book. A lot of them happen to be fusion restaurants, and some of them are just absolutely hilarious…

I hate fusion food. Actually, I have this line that’s “There’s absolutely nothing wrong with fusion food, as long as it’s done by Peter Gordon.” Peter Gordon is a New Zealand-born chef who works in the UK and brought some very good fusion restaurants  and he has a particular talent for uniting certain flavors. But it’s very , very , very difficult to do and very few cooks have the skill to do it.

Ideas can look silly on the page. I remember one time a pub menu had a vegetarian Thai schnitzel on it. So there together, we have vegetarian food, Thai food, and the Austro-Hungarian Empire. Awful idea. Don’t make me eat it. These are things are sort of clashing together, and should never be brought together. I suppose there is a universe where it possibly might have worked, but it’s very, very unlikely.

So what kind of sensibilities does a chef have to have if they want to do fusion successfully?

Good taste. It’s not about sensibility. Just have good taste. Good taste is one of those slightly undefinable things, but you know when you’re in the presence of someone of it and when the person who’s cooking for you is graced with it. Technique is very important, and obviously, we are meant to laud creativity. But, above creativity, is an understand of how sweet and sour and umami work together and ingredients that actually deserve to belong together is one  of the most vital qualities in a  good chef. I’m not sure it’s a sensibility. It’s just a quality, really.

Is it something someone’s born with, or can you develop it over time?

I do think you can develop it over time through experience, but I think it’s mostly something rather more innate. It’s an element of personality.

Quickly going back to the writing. Obviously, what you’re most known for is food writing and restaurant writing, but you have written a bunch of other things. You were talking about politics earlier…

I think of myself as writer, first, second, third, and ninth who happens now to write about food. I also don’t believe there’s such a thing as “food writing”. There is only writing that happens to be about food, and the experience I garnered in, what happens at the moment to be the first half of my career, covering crime, politics, and the arts, I think is still being quite useful for the business of reporting food.

I mean, as I sit here, there’s always a notebook in my back pocket, curved to my sizeable ass.  And it is what I say it is, a journalist’s notebook. I still cling to those eternal verities that ask people questions, and write down their answers. What you’re doing now, except you’re not writing them down.

So Microsoft recently purchased Yelp. I’m not sure if you’ve been following that news lately, but Google has been using Zagat recently and is using their reviews to enhance their search results and Microsoft has picked up Yelp in response to that, through Bing. Yelp and Zagat have two completely different models.

Entirely different but also relevant to what I do. I am not writing a restaurant guide. What I do is part of an ongoing conversation about eating out. The crowdsouce restaurant guide or sites, the likes of Zagat or Yelp or London eating, those various kind of sites, they are a way of aggregating information and helping people make decisions. I’m about providing 780 thrilling words to read on a Sunday. Those are separate things, but they may inform your thoughts and discussions about restaurants and eating to, but they are not the same thing in any way whatsoever.

So, you don’t think that one model is inherently better than the other one?

I have no view whatsoever on what’s going on online. That’s not to say I’m not interested in the online world, but I have neither knowledge nor expertise in that subject. I think crowd source sites are interesting, I think they’re a good source of information for people who know how to use them, I think they are as flawed as any collection of subjective opinions, but I do not know anything about the details of the different models. I always think it’s good to admit your ignorance.

Where do you see the future of restaurant criticism going, in that case?

To put the question in a different way, people ask me if there is a challenge to what I do from the blogs.

From the mass of people’s opinions.

Yeah. And the answer is simply this: If I am going to carry on and be paid to do what I do, go to restaurants, eat food, and write about it, I have to be better than that. I have to be a better writer. We can questions whether opinions are right or wrong, but the thing I have to do is write some prose that is better or more readable than your blogger, who is doing it for free. And when I stop doing it in a way that is better or more readable than the person who is doing it for free, then I deserve to lose my job. I think that applies across the board in professional media. I think in professional media, the content, paid for through advertising on the site or through pay walls, for that to have a valid future, then the people doing it have to be better than those who will do it for free. Professionalism requires it. And that means it’s quite a bit more than simply news gathering. You’ve got to present an authoritative, idiosyncratic worldview.

Do you think that’s possible nowadays with the way the media is structured?

Yes, the reality is that you’ve created a website which you’re focusing down on personalities. There is a place for human  personality, for interesting people with interesting things to say. In fact your site is about sorting out the stuff you don’t need to be interested in from the things you do need to be interested in. So, if the answer to your question was “no, that’s not possible”, then The Braiser should shut up shop one month into its life. But I don’t think you want to do that, really.

Well, thank you. That’s the most British way to be nice about something, ever.

It’s true, though. Do you know what I’m saying? That if there is no value to authoritative, professional opinions, then this little website doesn’t exist either. There’s got to be a place for that, but it’s dependent on people who are pursuing it, [and] the practitioners being good. If I get lazy, if I start writing sloppy, stupid columns that do not justify the opinions they express, if I appear to just be making cheap jibes at people simply because I want to make the gag, rather than because I really hated the restaurant, if I do any of that, then I deserve to be sacked. That’s why I’m constantly mildly paranoid.

Check back tomorrow for the second half of our interview.