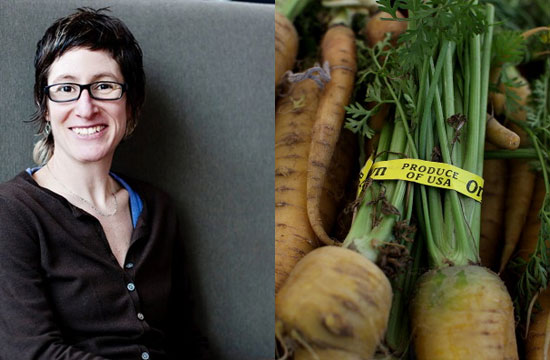 The researchers at Stanford University probably didn’t realize that they’d alienate a good portion of the restaurant industry when they released a study earlier this week claiming that, nutritionally speaking, organically-grown produce was no better than conventionally-grown fruits and veggies. (If this were the world of Get Jiro!, the locavore-hippie-freegans would probably storm Stanford’s campus and kill all the scientists they found.)

Though the spiritual children of Alice Waters screamed out in pesticide-fueled fear and anger over this study, James Beard Award-winning chef Jenn Louis — who is from Portland, and is therefore someone who would care deeply about organic labels — says that the study, and its detractors, are both missing the point.

In a conversation she had with Jeff Gordiner at the New York Times, Louis observed that focusing on local, seasonal meat and produce may be more effective in building a nutritious diet than focusing on organic foods.

“I don’t have a garden, but if I had a garden and I went out and picked some kale to have for dinner, every minute that it’s out of the ground, it’s losing nutrients,” she noted. “It’s losing flavor, because the sugars change. So when I’m trucking something up from Chile in the middle of winter, it’s not going to have the best flavor, nor will it be as nutritious.”

Whoa there, don’t go about raising a hipster mob to burn down her restaurant just yet. Louis supports organic farming — “It’s really good for the soil, it’s really good for continuing generations of farming practice” — but pragmatically, it can be difficult for farmers to maintain their crops without pesticides; and moreover, she notices a huge difference in the flavor of food, in-season, from local farms.

Why? Because she’s a chef and that’s what matters. “I don’t think it matters, flavor-wise, if it’s organic or nonorganic,” she said.

Check out her dining diaries here!