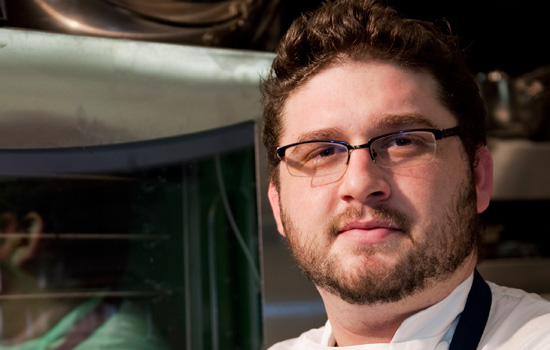 As the sunlight faded, Jesse Schenker walked into the Braiser Media Lounge slightly worn out: he’d just come off a lunch event for the New York City Wine & Food Festival at his Greenwich Village restaurant Recette, held court at SWEET on Friday, and still had dinner service to run later that night. But the highly-lauded Schenker was game enough to answer a few questions from us — though the cerebral chef did raise an eyebrow at the ridiculousness of our Dream Hotel Suite question. (Thank you for your patience, Jesse.)

What are you looking forward to?

We were involved in Sweets on Friday night, but it’s basically over for me. Just the amount of people that the festival brings to the restaurant, just because there’s so much overflow of food industry, media, and just diners in general from all over the country. I don’t know how far away people are coming from. Just the traffic on the street. I did a Chef Meets Farmer lunch today, which I just finished up. There was a sign on the street and all these people walking around so it just brought a lot more attention. You’re definitely busier than usual earlier and later last night and Friday night and Thursday night and probably tonight there will be some more. But it’s always a good weekend.

One of the good things about this type of weekend is that it is a really great way to start to bring more attention to your restaurant, especially since you don’t have as high of a profile as somebody with a television show or a book deal.

How have you been using this to your advantage?

Well, I haven’t directly been using it, I just think that the ripple effect is happening because when you look at the calendar for the weekend, there’s a lot of big events — these galas and tastings, where a lot of restaurants are involved and unless you really start clicking and clicking and clicking to get to the subcategories to really see who’s involved, Recette‘s name is not in the forefront. So, I got to do a luncheon at my restaurant. I was the forefront: my name, my restaurant’s name. So, that really helped and I think there will be a ripple effect from that. It was kind of Recette Chef meets Farmer with Jesse Schenker was good. It was on the calendar, it was right there, and so I think a lot of people that maybe didn’t know who we were will now, and there was media there taking pictures. In the coming weeks it will help make us more visual to the people that didn’t know we necessarily existed because of the lack of TV shows.

Did you have any celebrity sightings at Recette?

This weekend, no. But [generally], I mean, a handful of celebrities come in all the time. We’re on Greenwich Street and West 12th, so my neighbors — I have Sarah Jessica Parker north and Philip Seymour Hoffman behind, Hugh Jackman and Julianne Moore and Susan Sarandon… plus chefs. I have a lot of chefs in my neighborhood.

Yeah, it’s quiet, it’s good. I think the hustle and bustle of New York in general is overwhelming and then the hospitality industry is overwhelming. So, you put the two together and it’s like ultra-overwhelming. And so there’s something quiet and soothing about the West Village, being close to the Hudson, the water, and just the fact that the buildings aren’t as tall and there’s not as much traffic — foot traffic as well as car traffic. So it’s good to kind of reside there because at Recette we seat 40, but you could do 150 or 120 covers and if it starts at 5:30 and doesn’t end until after midnight, by the time I get home to walk all the way west… I have to go through Meatpacking, but I don’t have to go through Midtown. It’s not Lincoln Center. There’s no main thoroughfares where traffic is blowing through. That’s the reason I live there and have the restaurant there.

If your culinary icon walked through the door of Recette, who would that person be and what would you cook for them?

I have too many culinary icons… From a chef’s standpoint, it’s cliche, but Thomas Keller. He’s an innovator, he’s a visionary, he started a whole movement of food and precision and striving for perfection. He didn’t really necessarily invent anything really. He just really refined what was already there and he’s just amazing culinarily speaking. So, if he came in, I don’t even know. I’d want him to taste as much as I could.

What would you want him to remember from your food?

I’d want him to feel the love and the soul that’s in the food. Because I feel like there’s a lot of restaurants, there’s a lot of places you can go and they have the accolades, but there’s a disconnect and it can be very cold and stoic and I think when people come to Recette, there’s a warmth that you get that you can feel through the food. And my hands touch every plate. I’m there. Again, I’m not reinventing anything, I’m not doing anything that hasn’t been done. I feel like what we’re doing at Recette — it’s sort of different because we have a very, very casual atmosphere and it’s very reasonably priced, but the food is high-end and we take pride in those details and we’re meticulous. But it’s loud and it’s [the] West Village and there’s Nirvana playing on the radio so it’s a little bit of a contradiction, but it works. And it sets us apart from other places. So, I think I’d want him to come in and say, “Wow, this kid is really… he takes pride in what he does and you can tell.”

Would you ever do any of those television shows in order to get your name out there?

No. I’ve done a lot of news channels. I’ve battled on Iron Chef. But the Iron Chef thing, I mean when I was a kid, I was watching Iron Chef before it was in America.

It was great in Japan wasn’t it?

Yeah, it was amazing. And it was kind of one of those things I always wanted to do like, “One day I want to battle Iron Chef.”

Which Japanese Iron Chef would you want to battle?

They’re all sick. Chen Kenichi I think is brilliant. Sakai. The only one I don’t really know is the Italian guy. But Morimoto — he was a beast then, he’s a beast now. Thank god I didn’t have to battle him on this one, he would have torn me to shreds.

No, I battled Zakarian. He’s also great, but different than Morimoto. Zakarian is definitely a beast, too.

Pretend we live in a dystopian future. The government comes along and they’re putting together some sort of Hunger Games and they’re like, “Hey, Jesse, we’re going to take away your restaurant unless you compete in the cooking competition of your choice.” Which would you enter and how would you win it?

I would probably do Iron Chef again. And would I win? I would just win… I like to look at life as a chess game so I think I’ve analyzed the show. I analyze the judges; I look at it as a production. It’s mass-produced. It’s not necessarily about what the food looks like or tastes like. It’s a combination of everything. You have to take into consideration who’s eating the food. So, I take all those elements in and everything is very strategic. So, I think I would win through strategy, not just cooking, not just showing off that I have good technique. I would think it would be strategy, considering who the judges are, what they look for, how it’s plated, how it tastes. Showing off too much, you’re making the plate too pretty, but sacrificing flavors is not going to get you a win. Bobby Flay‘s presentation on all his food is not necessarily the prettiest, but he always wins because it probably tastes so damn good. So, it’s like: find the happy medium. And then again, like I said, take into consideration who your judges are. A lot of the time it’s a sportscaster or an actress; you’re not being judged by food professionals all the time.

Mario Batalli once said it was like some little skinny blonde actress from Beverly Hills.

Right, so she’s going to tell him about whatever. What does she know? So I agree: it’s strategy. I treat it like a chess game and I think I would win through strategy and [by] making no arbitrary decisions.

Actually something I just noticed throughout this conversation is that you seem very deliberate when it comes to what you put on your plate.

Nothing happens on accident. I live my life that way, believe it or not. My wife would like me more emotional [and] less intellectual, but it’s just how I’m programmed.

If you could take any chef at the Wine & Food Festival up to a room in the Dream Hotel for one hour, doors locked, no questions asked whatsoever, who would it be?

What are we doing? Talking? Having sex?

Whatever. Anything. You could order an entire Omakase tasting menu. God knows what you’d do in that room.

That’s a tough one. Is Danny Meyer involved?

Yeah, he’s got Shake Shack here and everything.

Is he an option? Because he’s not a chef.

I would take Danny Meyer.

And then you would…

I would probably get just a couple double esspressos and that’s probably it. And I would just want to talk business. Pick his brain.