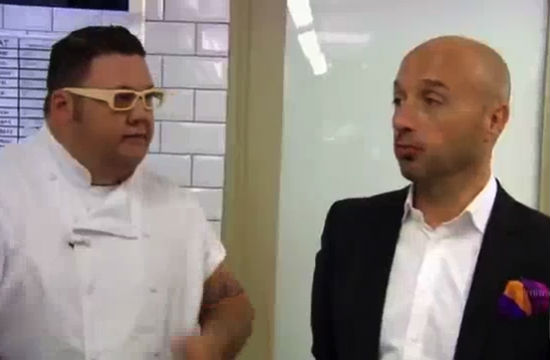 On last night’s MasterChef, the final six took over the kitchen of Hatfield’s in Los Angeles for service (Gordon Ramsay and Quinn Hatfield are apparently BFFs — Quinn appeared on this week’s Hell’s Kitchen, too!). They split into teams (which wound up pitting boys against girls) but, interestingly, MasterChef’s first ever blind contestant, Christine, went from regularly being the last one picked for team challenges to being the first one picked in this challenge of cooking in a Michelin-starred restaurant.

The judges voiced their surprise, but none quite so offensively as Joe Bastianich. Gordon, who has barely concealed his favoritism towards her for the entire competition, asked his fellow judges where they would put Christine in a Michelin restaurant. Graham Elliot volunteered that her superb palate would best be put to use at the end of a line, finishing off a dish. Joe oh-so-delicately replied that he’d stick her in the coat room.

“No!” Gordon shot back, shocked.

“This is a live kitchen, Michelin-starred restaurant. She can’t do it. She’s a liability.”

Check out the tiff below.

Of course, despite Christine’s handicap (and Monty’s? She’s hard of hearing all of a sudden? Since when?), the Red Team still won the challenge, and Joe was forced to recant his previous statement. Watch him eat his words:

Other highlights included David Martinez setting a plastic squeeze bottle down on a hot griddle and melting it. Obviously he was kicked off but not before Graham offered him a job at either g.e.b. or Grahamwich. David’s choice! Let that be a lesson kids: do dumb things, get insane rewards. (We hate reality TV.)