John Kasich Goes HAM On Some Italian Food In The Bronx 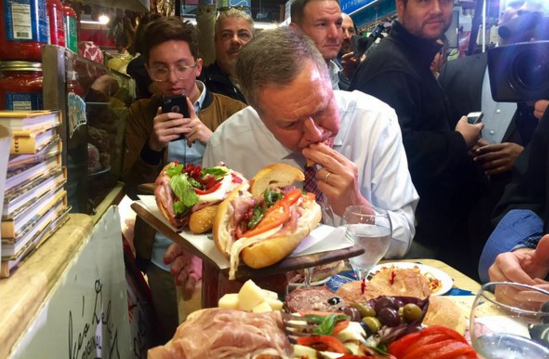 If you are John Kasich, eating is tough stuff. First of all, he doesn’t understand the basic rules of fork and knifery, specifically with regard to pizza.

The GOP candidate went to Arthur Avenue in the Bronx today, famous for its Italian food, and really went HAM. I know how he feels. When I’m at a new restaurant I like to try a lot of different things, because who knows when I’ll be back again? But Kasich really took it to the next level. He went after it at Mike’s Deli, consuming two orders of pasta, a massive sandwich, pasta e fagioli, and wine. He appears to be involved in some sort of competitive eating challenge, though who it was against I have no idea.

Obviously, everyone on Twitter had something to say about it:

I think Kasich is enjoying the Bronx pic.twitter.com/WXOBhO84my

This ain’t Ohio – feast that awaits John Kasich in the Bronx. He has appearance at Mikes Deli on Arthur Ave. pic.twitter.com/AbN7fkrr8F
— Jennifer Fermino (@jfermino) April 7, 2016

Kasich is going wild, eats two helpings of spaghetti and part of a huge sandwich

Kasich just got mad at the deli owners for trying to take his second plate of spaghetti away from him
— Max Tani (@maxwelltani) April 7, 2016

Here is a partial rundown of the whole experience:

Donald Trump Gets Punched in the Face (On a Donut)