The Plot Of Jon Favreau’s Chef, According To His Vines (And Our Imagination) 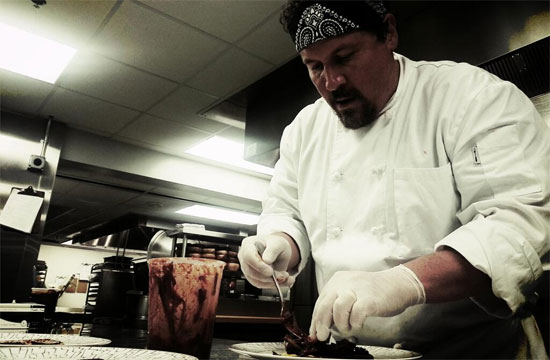 Over the past few months, the rest of the world marveled over director Jon Favreau’s Use Of Technology to announce his cast for the upcoming movie Chef. We know! People sometimes use technology to communicate! (We call those people “witches” and we drown them, like in The Crucible.)

But when Favreau’s not using Vine to make major casting announcements usually reserved for press releases, he also gives us fun sneak peeks and vignettes into the making of Chef. A lot of them include his new BFF, Roy Choi, and his food truck Kogi BBQ. (Choi, if you do not parlay this consultancy into a Stan Lee-esque cameo in the next Avengers film, you will have wasted so much time.) And, if you look carefully enough, you might actually learn more about what’s going on in the film, too! Come speculate with us, won’t you?

Roy Choi demonstrates the proper technique for pulling meat off the flat-top during a lunch rush. There is a small child in the truck, leading us to believe that a Small Plucky Child will follow Favreau’s chef character around, like in that other movie that Jon Favreau just made. Compare and contrast Favreau’s dormant feelings of fatherhood in Iron Man 3 versus this movie.

From what we can tell, this movie is going to involve a lot of hoagies. Or Cuban sandwiches. Or Costcos. The curly-haired mystery faun known only as Plucky Young Child has re-appeared. Will he bring meaning to Favreau’s character’s life? Will he be his inspiraaaaation?

Dustin Hoffman and Scarlett Johansson pretend that English is not their first language. They are world-class actors. This should not be hard for them, though English is notoriously one of the most difficult languages to learn.

This is Roy Choi’s kitchen (metaphorically). Everyone else just borrows it.

Plucky Young Child appears again, like a Jiminy Cricket who can be easily seized by Child Protection Services.

Sofia Vergara attempts to peel the face off of Plucky Young Child (PYC!), so she can escape from her cell in a Tennessee courthouse and continue to stalk Clarice Starling.

PADMA LAKSHMI WHAT ARE YOU DOING AT THAT TABLE YOUNG WOMAN. THAT TABLE IS FOR MOVIE STARS (and Roy Choi) ONLY.

A mockup of a parking lot filled with food trucks. It relieves us to know that this movie will reflect real life: Kogi BBQ is infinitely more popular than every other food truck in LA, ever.

So basically, this movie is going to star Roy Choi and PYC. Everyone else is incidental. Robert Downey, Jr.? What?