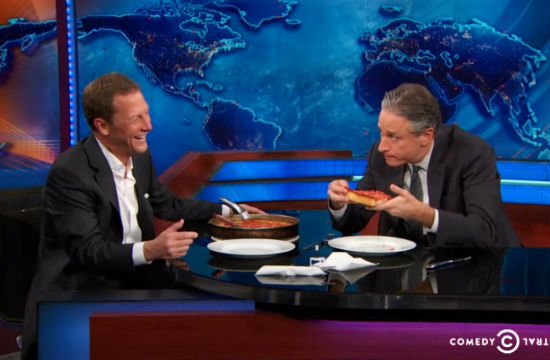 First Illinois becomes Sweet Sixteen and now this? Chicago’s having a good week.

Natives of the Second City have resigned themselves to fighting the deep dish pizza fight in vain, mostly because people who denounce it have only had the suburban chain Uno Chicago Grill version, and yes. That kind tastes like rat jacuzzi.

But if you ever get the chance to go to actual Chicago and eat a proper slice of deep dish from a local, native purveyor, such as say, Lou Malnati’s, you, like Jon Stewart, might change your tune.

Yes, there are some simple facts about deep dish you’re going to have to accept: you can’t fold it; you have to eat it with a fork and knife; the crust is going to have actual flavor and texture and heft, unlike New York pizza, because it has to hold up against a siege of toppings. We’ll even entertain the theory that it’s isn’t really pizza, but rather, a savory pie. Sure. Whatever floats your boat. But do not deny that it’s delicious. Jon Stewart can’t.

Observe the pizza truce, courtesy of Marc Malnati: the hero that Gotham deserves, below.