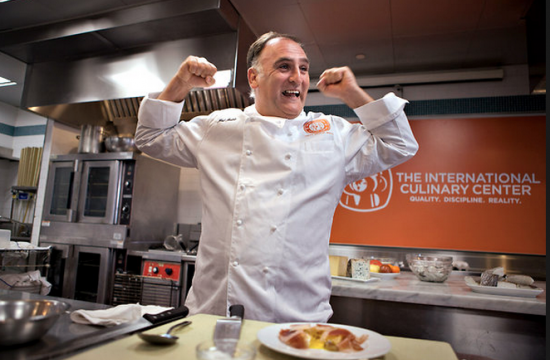 Spain’s economic crisis not only led to a 24.6% unemployment rate and a bust property market, it also shuttered some of Spain’s most important institutions: its restaurants. The land of tapas and late-night cenas has closed 12,000 restaurants since the crisis began in 2008, and the former vanguard of Spanish cuisine have been forced to go downscale, throwing the future of Spanish food production in doubt.

Jose Andres, the eternal optimist and the chef most likely to fashion a whimsical jalopy out of chorizo and olives, thinks otherwise. Hence, he’s partnered with the International Culinary Center in Manhattan as its first Dean of Spanish Studies, and is building a program that will train would-be chefs in the purest form of Spanish cuisine, and not one “bastardized” through fusion with other cuisines. How pure is it, New York Times?

Over the next decade, dozens of American cooks schooled in the authentic cooking of Spain and trained in Spanish restaurants, will begin to populate the United States. In due time, hundreds, then thousands, will serve up a cuisine that is not Mexican, or Caribbean, or Latin American, but one faithful to Spain. Not only will they staff a national roster of credibly Spanish restaurants, but they will go on to create new ones. Ultimately, that will ramp up American demand for the wine and products of Spain.

It’s always been Andres’s life goal to get the program running (as he told the center’s founder Dorothy Cann Hamilton, “We have to do a Spanish school…I’m sorry Italy got to you first“). But with the seemingly endless economic crisis imperiling the farmers and producers of Spain’s food, Andres is steadfast in his goal to “push for the next level of quality in Spanish cuisine.”

“If eventually we create a pool of thousands of people graduating from the program, this opens the possibility of thousands of new American restaurants putting out more authentic cooking,” Mr. Andrés said of the $5 million program, which includes, among other things, a trip to Spain and an “intensive kitchen Spanish program.” (From our own personal experiences, kitchen Spanish includes a lot of swears and putdowns to one’s manhood, regardless of whether one is a man or not. Maybe kitchen Spanish from Spain is different.)