Josh Ozersky: ‘Fieri, Bourdain, Richman, Zimmern Are Virile Guys That Get Boned All The Time’ 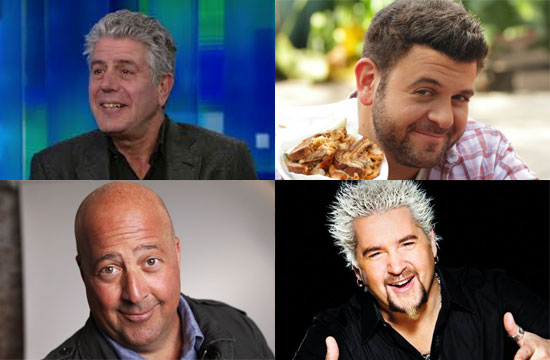 Gents, care to respond? Because Josh Ozersky is talking up a mighty game for you, and we’d hate for your hot wives to put you on blast later. (Seriously, The Ladies Fieri, Bourdain, and Zimmern are all wicked gorgeous. Richman remains unwed, but ostensibly still gets boned all the time. So even if the other guys aren’t, props for good catches.)

Josh Ozersky sat down for an interview with Thought Catalog’s Mythologies column (which is every bit as charming as the tagline “Cultural studies without tears. For the ‘Former Semiotics Major at Brown’ in everyone.” suggests), and what we were hoping would be an enthralling discussion on gender in the foodspace — as the lead-in suggests — devolved into this. Said Josh:

“One of the things that you’re talking about with dude food, whether it’s explicit or implicit, is that the people you’re talking about — Fieri, Bourdain, [Adam] Richman [of the Travel Channel show, Man v. Food], [Andrew] Zimmern [of the Travel Channel show Bizarre Foods] — are virile guys that get boned all the time. That’s why none of them are fat. The only one of them that’s not implicitly a Hef figure is Zimmern but his masculinity is unquestionable. They’re all hot bundles of love. Zimmern looks like a chef; he’s overweight, but he’s not a fat, waddling tub of lard, he’s, like, avuncular. Tony is a sexy guy, Richman and Fieri are menschy everymen who have a certain life force that they emanate which is kindred to virility. They’re guys’ guys; they’re not a numbnuts like The Frugal Gourmet.”

Sigh. So boys get to run the chef club and they get laid all the time. Meanwhile, lady chefs have to work twice as hard for the same recognition, and, as a result, are depicted as mannish and unsexy. Excuse us while we go vent our frustrations.

Related Posts:
Meat Glue: Let Andrew Zimmern And Josh Ozersky Tell You About It
Josh Ozersky Is Insulted By The Volume Of Bacon Questions He Receives, Perhaps We Have Judged Him Too Harshly
Girl On Girl Action: Our Editors Go Deep Into The ‘Female Chef’ Debate