Julia Child Was The Embodiment of YOLO, In A Classy Way 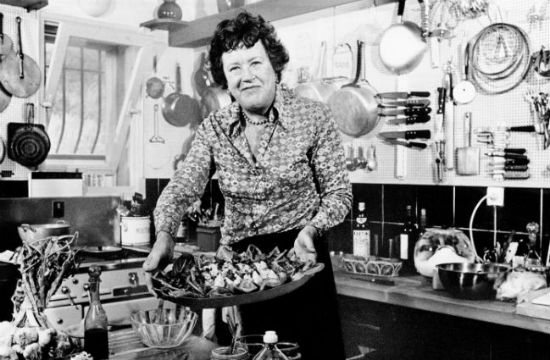 While Julia Child may have been known for breaking rules in everything she did, in the new book Julia Child Rules/Lessons on Savoring Life, author Karen Karbo tells us how to make the most out of life using just that — a list of rules. In what the Los Angeles Times calls “a lighter approach to biography,” Karbo mixes anecdotes from Julia’s life, as well as her own, to make up this superior collection of guidelines. Except when Julia Child does it, we call it “living with abandon,” not YOLO. It sounds way classier that way.

…the first rule: “Live with abandon.” The first chapter’s first anecdote, all about a cross-country trip made by Julia McWilliams and the man she would marry, Paul Child, has a boozy charm: “A bottle of vodka and a thermos of mixed martinis rolled around the back seat of Julia’s Buick. It was a time before air-conditioned vehicles and open-container laws.” It was also a time when women were supposed to know their place, a maxim that Child seemed to ignore or miss altogether.

Oh, to be a fly on the wall during that road trip!

Out of all the other Julia Child literature that’s out there, Karbo succeeds in pointing out something that should be, but isn’t always, obvious to us: the way Julia lived life with abandon, first and foremost, was by not allowing her age or place in life to dictate her career.

“No one,” Karbo writes, “told Julia that middle-aged women weren’t allowed to hog the spotlight, or that if they did, they could only do it if they passed as someone much younger…. Middle-age was the time of Julia’s life.”

Other rules from the book include “Learn to be amused,” “Obey your whims,” and “Cooking means never having to say you’re sorry.”

For more words of wisdom from Queen Julia, click here.

RELATED:
Julia Child Actually Wrong about Washing Raw Chicken; Everything You Believed Is a Lie
The World According To Julia Child: Her 10 Best Bon Mots
Julia Child Gets Her Own Comic Book