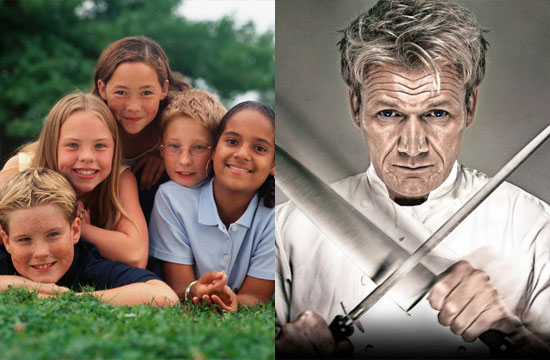 Have you ever wanted Gordon Ramsay to call your beloved child a “f*cking donkey?” Do you dream of him throwing your kids’ hard work into a garbage can? Do you hope that one day he’ll scream at your children until they jumped off a bridge?

Your dreams could become a reality, because FOX and Gordon recently announced that they’re seeking children for a new series called Junior Masterchef! And when we say “children,” we don’t mean the emotionally stable 13-to-16-year-olds that the aborted Top Chef Junior series sought once upon a time. No, FOX is looking for the youngest, most innocent, most fragile children of them all: children between the ages of 8 and 13.

The casting call, provided by Eater, wants children “who regularly [cook] dinner for [their] family,” have “knife skills to match the professionals,” and “won’t be intimidated when quizzed them on the doneness of their soft boiled egg or the sear on their scallops.” In short, if you’re a “pushy stage mum” who abuses her kids, this show’s for you! Because who knows? Your child could be famous one day, like a culinary Lindsay Lohan!

Apparently Junior Masterchef, a spinoff of the original Masterchef, has many international versions in places like Australia, Thailand, India, and Israel — countries where the hosts are not Gordon Ramsay.

As for the tyrannical chef, we can only surmise that Ramsay is doing this show to collect children’s tears, which he bathes in so he can retain his youth. If you are interested in participating in Ramsay’s experiment, casting information can be found here.