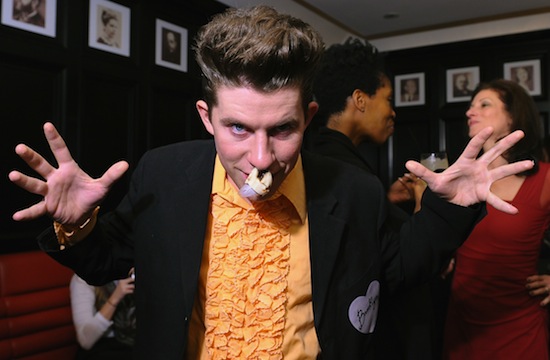 The Season 8 winner of Food Network Star, who was on #TeamAlton, sat down with his cooking competition mentor on Brown’s podcast, The Alton Brown Cast, to discuss — what else — culinary innovation! It’s what makes Warner put his socks on in the morning, and it’s also what leads him to create dishes like a banana split pea soup. See below.

The inspiration behind the dish, Warner explained, was all in the pun. Replied Alton, “But that doesn’t always a dish make!” Of course, people’s initial responses weren’t as lit-positive as Justin hoped. He got a lot of “this is the grossest sounding thing,” but according to Justin-logic: if the flavor combinations work, then the dish is rational. “You called me an expert. Trust me.”

Justin probably got his cue from his mentor, who instructed him on Food Network Star to trust his instincts: “You were clearly mentoring me, if that meant you said, ‘Just go do it.'”

Another creation that didn’t make sense, but by the Word of Justin: Buffalo Blue Cheese Cake. As Brown said, your eyes see cake, your mouth wants chicken. (Okay, so rationality doesn’t always work.)

Check out the podcast yourself and listen to the two discuss Brooke Shields, West Virginia, and Justin Warner’s show, Rebel Eats. Bottom line: Justin prefers to do “the wrong thing the right way.”