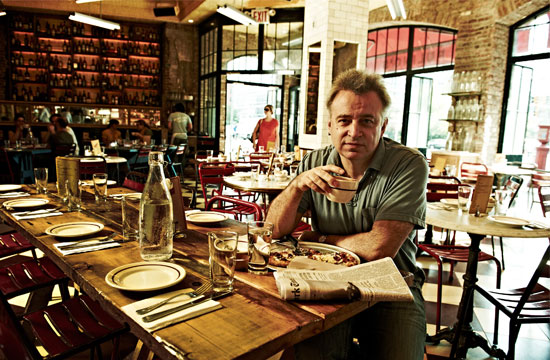 In a profile in The Guardian previewing the London opening of Balthazar, legendary restaurateur Keith McNally revealed that long before he was a world-famous restaurateur, he was…an…actor! No, seriously, ditch the 1940’s musical melodrama; he was actually a serious actor (who also made sideways ventures into strip clubs).

After getting his break in a Michael Redgrave film about Charles Dickens as a child, McNally continued to act in his teens — notably appearing in 40 Years On with the legendary John Gielgud in the West End. Eventually, after time spent behind the lighting board at The Rocky Horror Show and as a manager in a strip club (“I had a terrible fear of seeing someone I knew, maybe my dad”), McNally moved to New York in an attempt to become a director. Unfortunately for those ambitions, a few highly successful restaurants (particularly the Odeon) got in the way.

But McNally didn’t let go of his dream. As he recalled it:

“I got so depressed about being in New York not doing what I wanted,” he sighs. “By the late 80s I had the Odeon, Cafe Luxembourg, Lucky Strike. I had Nell’s where Rose Gray [later of London’s River Café] cooked. But I didn’t care.

“I had to stop for six months. I wrote a script [End of the Night, about a man whose life is falling apart], realised it would take forever to get made so I borrowed $500,000 for a new restaurant and used that.” McNally directed the film in black and white. “It was selected for Cannes,” he says. “It got good reviews and I made the money back.”

Unfortunately, a second attempt at filmmaking didn’t turn out so well and resulted in the end of his marriage. At the same time, “successful, world-famous, multimillionaire restaurateur” isn’t the worst backup gig for an actor-director.

[The Guardian via GrubStreet]